Terry Test ’73 continues to be impressed with Keuka College, and the experiences it provides students. 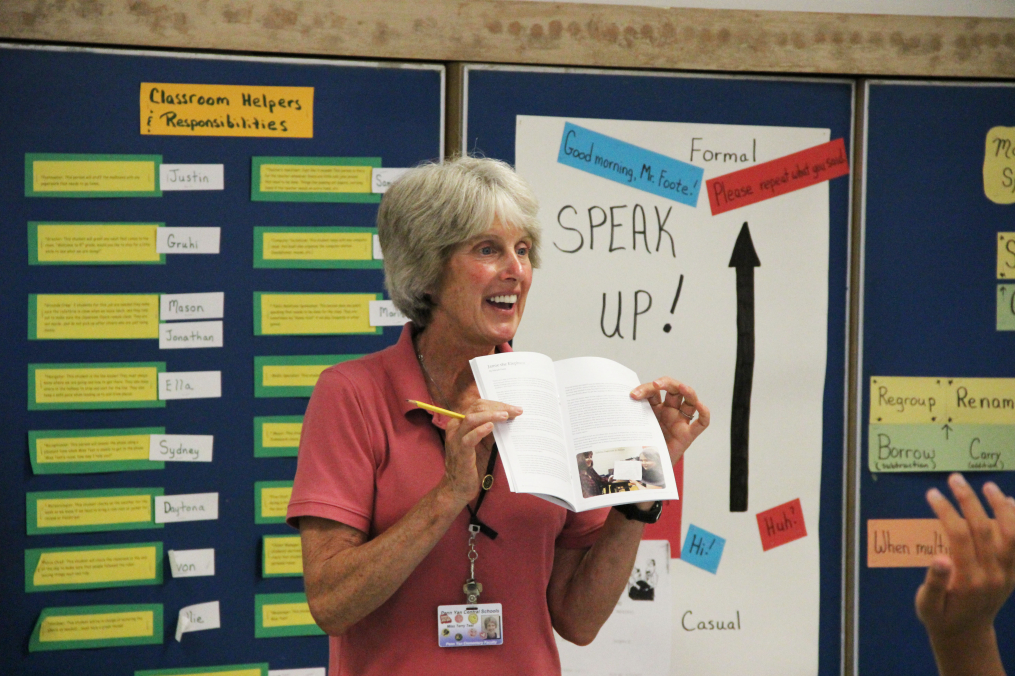 Some people know what they want to be when they grow up, even from an early age. Others aren’t sure until high school, college, or beyond. Terry Test, a member of the Keuka College Class of 1973, falls into the former category.

Terry, a Penn Yan resident, knew she wanted to be a teacher on her first day of school, when she was just four years old. As both her father and grandfather were educators, teaching seemed a natural path to take, particularly as reading and math games were common entertainment in her house while growing up.

But that didn’t mean Terry couldn’t entertain other options—she briefly considered a career in the Air Force as a pilot. But the draw to education was stronger, and she served as a teacher at Penn Yan Elementary School for more than 40 years.

While Terry is a proud Keuka College alumna, her path would have been different had she attended SUNY Geneseo, as she once planned.

“I applied and was accepted, but the daughter of one of my dad’s friends was at Keuka College,” says Terry. “She spoke quite highly of her Field Period® experiences, which was a strong reason she chose the College. My dad told that to me, and said ‘let’s just visit … you don’t have to go there, but let’s take a look.’ We were on campus about 10 minutes and I knew this was the right place for me. I loved that we had a lake, as I was an avid swimmer.”

And while Keuka Lake remains a popular attraction for potential Keuka College students, Terry says Field Period® is one of the College’s greatest assets, and continues to be a top reason students choose to enroll.

Those experiences included working with mentally challenged adults, reading to pediatric patients in a Puerto Rican hospital, and teaching second-graders in a low-income school near Daytona Beach, Fla.

From Field Period® student to host

Her Field Period® experiences and the professionalism she gained may have helped her land a position in Penn Yan Elementary School, where she taught both fourth and fifth grades. But it wasn’t just her varied experiences that secured Terry’s job prospects—she credits her student-teaching role as well.

“I was able to really work with the young students, rather than simply be an observer in the classroom,” says Terry. “I valued that opportunity.”

And like those who provided Terry the chance to build her skills, she did the same for other aspiring teachers.

“I hosted several Field Period® students in my classroom over the years, and one thing I told them was to use these experiences to learn, gain experience, and figure out what you want to do,” says Terry. “You don’t want to graduate only to think ‘I wish I had.’ Keuka College students have the opportunity to decide what they want to do, or change their mind about something.”

While the Field Period® experience is near and dear to Terry’s heart, she also “credits the College’s academic structure, and its on-campus activities, with educating real people for the real world. I also find the coursework assigned to today’s Keuka College students challenging, and always of the highest quality. The faculty are helpful and intuitive, not just with academics, but as mentors and role models for personal growth as well.”

She cites faculty members like Dr. Jennie Joiner, chair of the Division of Humanities and Fine Arts, and associate professor of English.

“It is hard to put into words what faculty like Jennie mean to the College,” says Terry. “She’s insightful, willing to take educated risks, and is flexible. I met Jennie when she first came to work at Keuka College. She had rented a house near me, and we both liked to walk. So we began walking together, and talking. We discovered we were both teachers, just on different levels. It was through these walks and talks that we thought about bringing our different students together in a meaningful way.”

Bringing together their two groups of students resulted in a project titled “Who is Penn Yan?” which pairs Keuka College students with members of the Penn Yan community. Now in its fifth year, the project began with Terry’s class of fifth-graders, and students taking Dr. Joiner’s ENG 125 Literature in the Wider World class coming together. Since Terry’s retirement, the College students have been talking with residents of Clinton Crest Manor. With each group, the College students interviewed the fifth-graders and the Clinton Crest residents, and wrote stories about each one of them.

“The staff at Clinton Crest have been so open and welcoming to the College students,” says Terry. “It’s important to share stories among the generations, and for the students to listen to their experiences, and keep these special memories alive.”

And sharing experiences is what the College is about. From faculty like Dr. Joiner teaching her students, or alumni returning to campus to help freshmen move in, or hosting a student-teacher in the classroom, the common experience keeps the College family strong, and connected.

“I’m just one example of what Keuka College can do for people,” says Terry. “I’m thrilled the College has continued to grow, that the student and faculty populations have grown, and it’s still a good, friendly place. As a Keuka College grad, I’m so impressed with the 2017 version of the College, and the experiences that are provided for today’s students.”