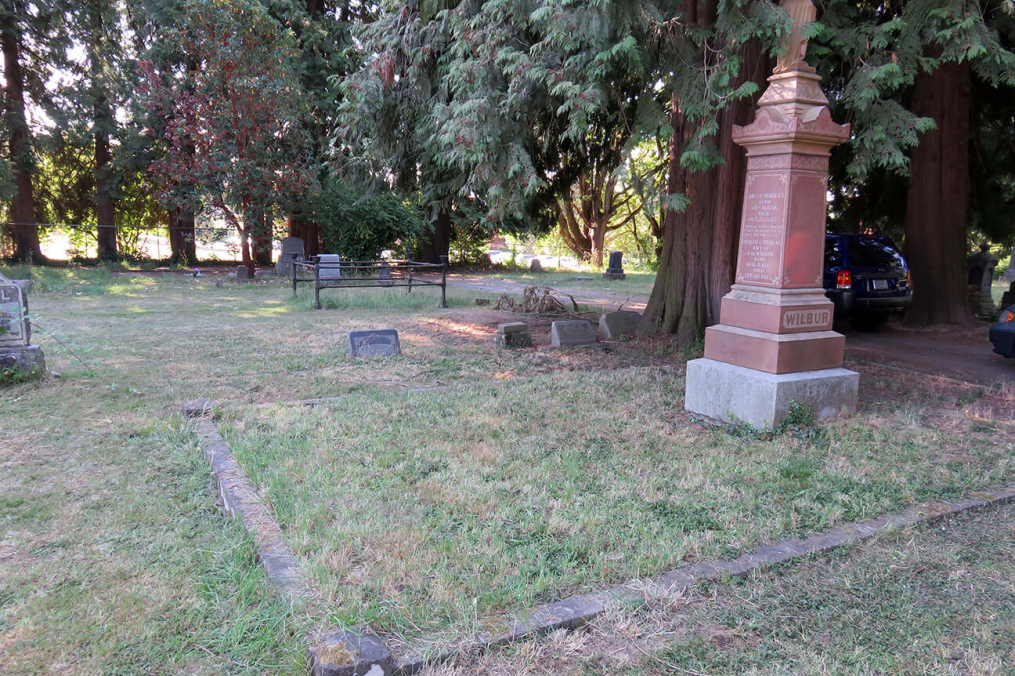 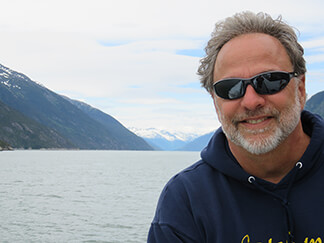 It was like watching the sun’s brilliant flash just before it disappears over the horizon. I couldn’t believe what I was seeing. I had been trying to find this woman for years, but every lead had been a dead-end. Was my search finally over?

Ann Wilbur had died in 1851, and was buried in an old churchyard in Portland, Oregon. The year before, her father had built the town’s first Methodist church right next door, so it made sense to bury her there. But by the 1890s, the small town had become a city. Developers coveted the flat land around the old cemetery, making offers too good to be refused. One by one the cemetery’s inhabitants were taken away, buried closer to the care of loved ones. Finally, only Ann was left. But since both her parents had died in 1887, the unlucky girl remained where she was, a forgotten orphan of a troubled church. What had happened to this young woman?  I decided to try and find out.

I painstakingly combed through ancient Methodist newspapers, and after going through hundreds of issues, I finally hit pay-dirt. Her remains had apparently been reburied in Salem’s Lee Mission Cemetery in 1892, in a plot shared by her parents and William and Hannah Roberts. But she had been in the Portland cemetery for nearly half a century, and there wasn’t much left, just “a few bones and some items from the casket.”  A strange letter also appeared, appearing to confirm that story, but there was little evidence at the purported gravesite. No marker or plaque, just the fact that the Wilbur’s side of the plot was a bit larger. 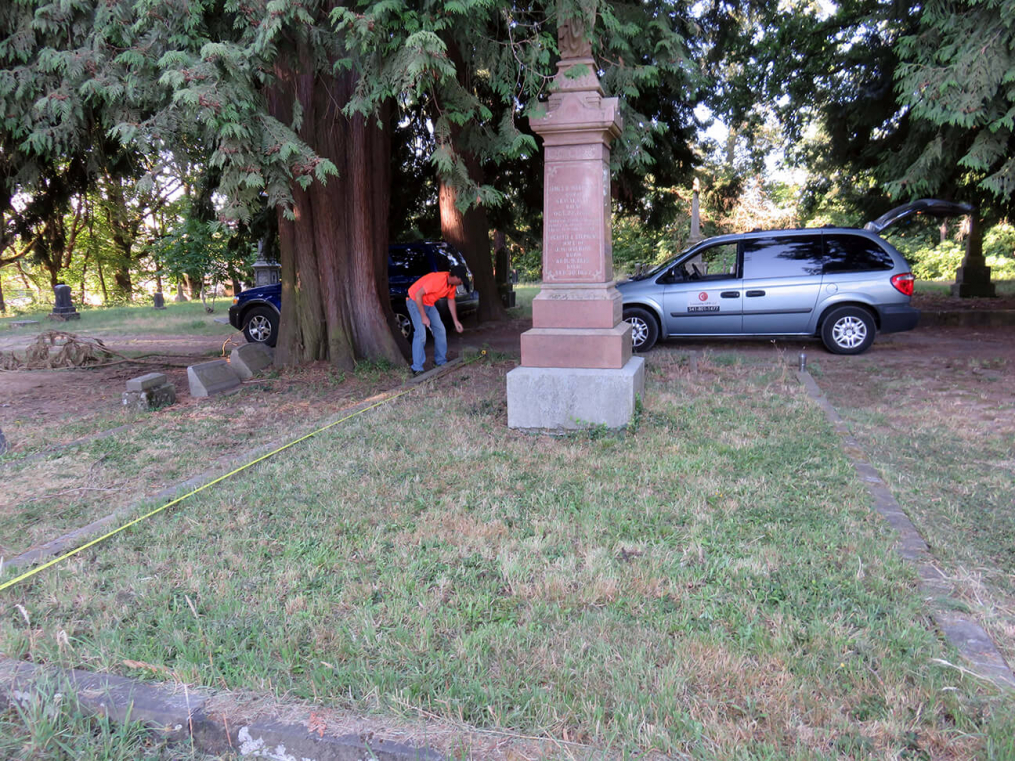 Reid Davis of Concrete GPR taking detailed measurements of the entire burial plot. The roots of the large cedar to the left of the picture had grown roots all through the graves. 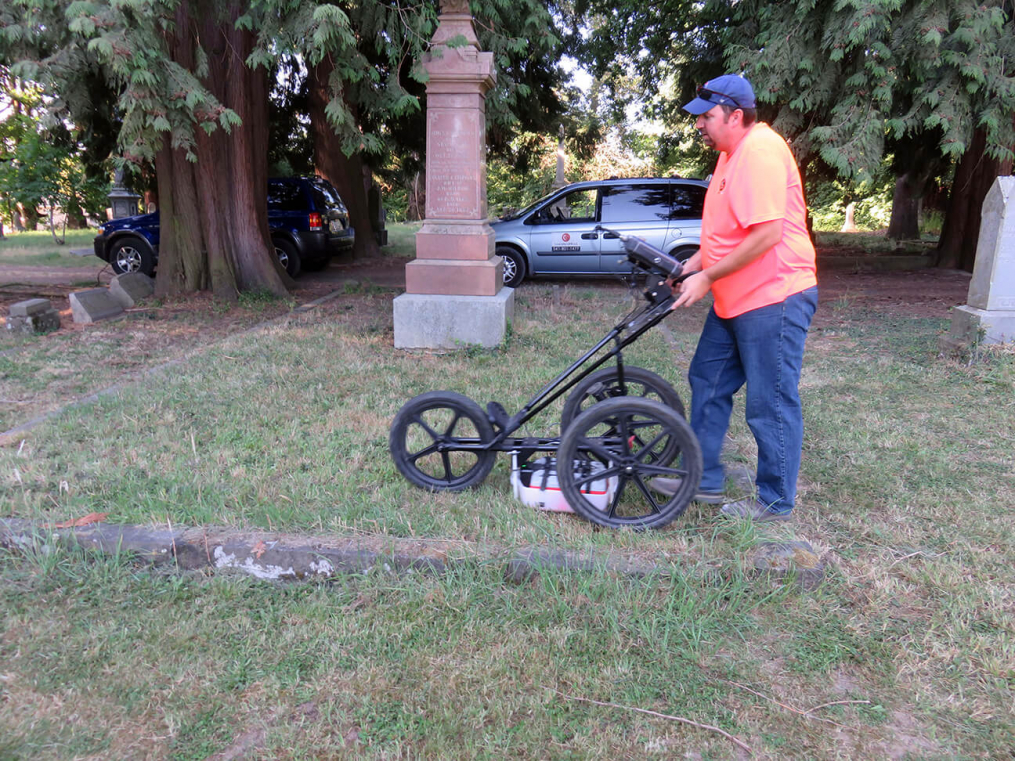 Jeff Sohlstrom of Concrete GPR using ground penetrating radar to search underground. Both Reid and Jeff used different frequencies to do multiple searches in the plot. 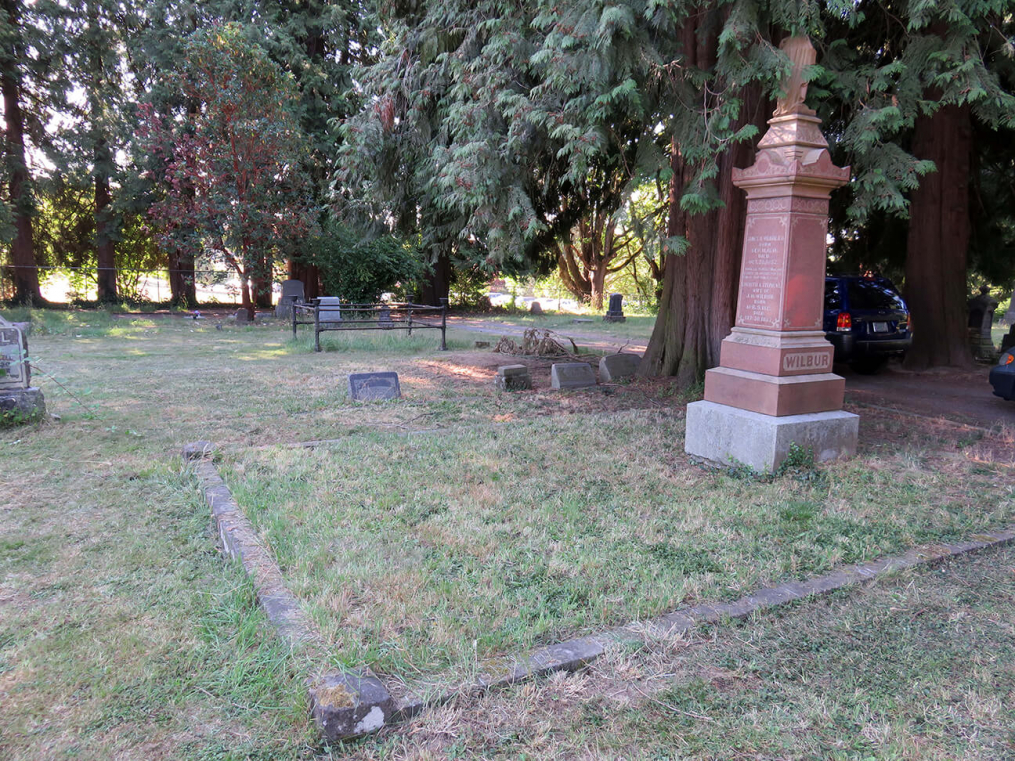 James Wilbur and William Roberts burial plot, Lee Mission Cemetery, Salem, Oregon. The portion in the foreground belongs to the Wilburs, and the likely Ann Wilbur burial site is in the left center, just inside the low cement wall.

Even by pioneer standards, Ann Wilbur was dealt a hard life. Despite being the daughter of a prominent Methodist minister, she had married the Episcopal Rev. St. Michael Fackler, an action that undoubtedly raised a few Methodist eyebrows. For many American Methodists of the period, Episcopalians were only slightly more acceptable than Catholics, so her choice of a husband shows a young woman determined to be herself. But like most women of the period, she lived by the choices of others. It had not been her decision to leave upstate New York, sail halfway around the world, just to bring the Methodist gospel to hard-scrabble farmers in some place called “Ory-gone.”  And one needs little imagination to conjure up the sort of life that confronted a teenage girl in the muddy and rugged towns along the Willamette River. Furthermore, although she had made the decision to accept the somewhat delicate Fackler, a whole host of prescribed roles came with that choice. Even the crown jewel for all pioneer women—a child—was denied her. The difficult labor of her only child not only ended up killing Ann, but the child herself never made it to her twelfth birthday.

Could modern science confirm Ann’s burial in Salem?  She had left no voice for posterity. No faded daguerreotypes, no letters, no diary or journal, no heroic biography—just a few mentions in her father’s journal, a few more in some obscure secondary sources, and an indirect reference to her death in Fackler’s donation land claim record. But maybe modern science could lend a hand.

So I hired Concrete GPR, a company that uses ground-penetrating radar (GPR) to detect underground materials or disturbances, then converts the resultant radio waves into computer images. Reid and Jeff were painstakingly thorough. They measured and crisscrossed the entire burial plot, using two different transmitters and three different frequencies. As I watched their intense efforts, I couldn’t help think that John Wesley himself would have appreciated their “methodical” approach. Their data sets became “slices” in the ground, and Reid then assembled the slices into a video that acts as a visual elevator, taking us deeper and deeper below the burial plot’s surface. What he found was amazing.

Ann’s parents’ graves had all but disappeared, their simple wooden coffins and remains having been absorbed into the soil. They died as they had lived: frugal pilgrims, unpretentious, on their way to Beulah Land. There is a brief glimpse of their possible location at 0:30 in the video, at 5.3 feet, as two vertical slashes on the left side of the video. These ghostly images are likely all that remain of the couple from Lowville, New York. The burials of William and Hannah Roberts, however, left far more vivid traces, and their deaths also imitated their lives. Urbane and sophisticated, Rev. Roberts was known for his wit and elocution from the pulpit, and had risen high in Methodist circles. The Roberts were both buried in metal caskets, and their burials show clearly on the right side of the video, as two vertical red marks at the 0:29 point, beginning at 4.8 feet.

But it is Ann’s simple reburial that steals the show. The young woman whose earthly life was unlucky and short, who vanished completely from the pages of history, now reappears some 160 years after she last walked the earth. Ann’s interment shows as a bright red burst, found precisely at the location and depth one would expect for a small reburial. At 0:17 on the video, and at the depth of 1.8 feet, a circular red orb begins to appear on the left center of the screen, expands to a red flash, then almost as quickly vanishes. Resting close to her parents, Ann Wilbur had finally been found.

I went back to the cemetery one last time. I saw something that finally closed the chapter on Ann and those buried with her. Two giant cedars flanked the Wilbur plot, thick enough that it took over three of my outstretched arm spans just to reach around their shaggy trunks. I knew from the GPR data that their roots had woven themselves all through the graves: encircling, enfolding, and yes, absorbing. Cedar is the wood used by coastal tribes for their burials, so I welcomed it here. But how often do we sing our stories of plants that link our human lives to the beyond?  Ancient ones lift their dead in trees; the tale of Baucis and Philemon, as well as the innumerable varieties of the Tristan and Iseult legend speak to us all; the common folk song Barbara Allen, and even the modern story Where the Red Fern Grows all show the power of plants overcoming death to celebrate worthy lives. But unlike those stories, these giant cedars were unchanged; it was the Methodists who were altered. I knew from working with Oregon Trail experts that cadaver dogs are still used to detect burials that took place back in the 1840s. Dogs with unbelievably sensitive noses, sitting on their haunches and pointing precisely at the pungent tips of sagebrush that were releasing the last of the settlers buried below. We consume plants in life; they take us after death. There at the cemetery, I looked far above at the feathery tops of the cedars, swaying gently in the summer breeze. Then I said a silent goodbye to those who, even now, were moving up their trunks, their stems.