Chris Cahill ’15 is finding a wider audience for his Christian music – a fact he attributes, in large part, to Keuka College. 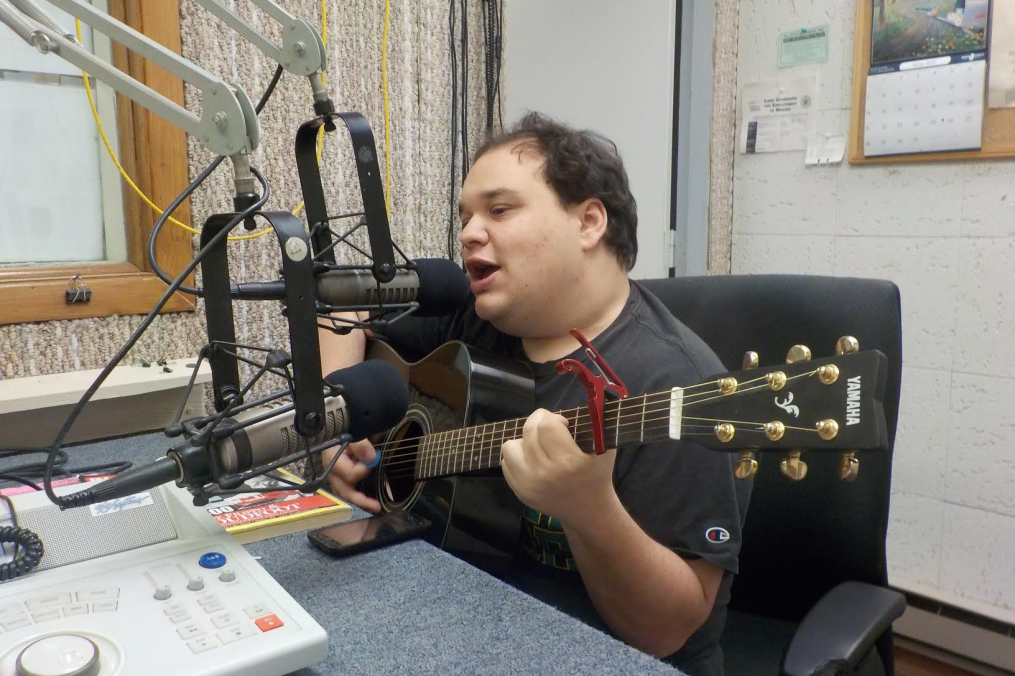 Those tuned to Hornell radio station WLEA’s “1480 Club” on the morning of May 25 were treated to a pair of original Christian songs. In a strong tenor that belied the early hour, Chris Cahill ’15 accompanied himself on guitar as he sang “Our God is Powerful” and “Safe for Another Day.”

Listeners could hear his voice and chord work, and they learned during a subsequent interview that he composed the songs himself. Less evident: The Keuka College education and experience that landed Chris not only behind the microphone that morning, but before worshippers at the nearby Consuming Fire Church every Sunday.

“A lot of the success I’ve had comes from Keuka College,” says Chris, a 25-year-old native of Hornell, Steuben County. “I’m using my marketing degree in ways I never knew I could.”

Specifically, Chris is putting his College-honed skills to work promoting and publicizing both recordings and live performances of his gospel music.

“I had no idea I could use my marketing degree outside my profession,” he marvels.

Making friends ... and losing one

Chris was already writing music that reflected his faith when he landed on the College campus in 2011. And he put it to immediate use.

“From the word go, he had a guitar and was singing and leading in our midweek service,” College Chaplain Eric Detar says of Chris's leadership of the College’s weekly non-denominational Christian worship service. “Chris is very committed to his faith and to his beliefs. He’s very talented musically. For him, this is how he lives out his beliefs.”

Chris arrived on campus with something else: self-consciousness about a lifelong challenge: Tourette Syndrome.

“When I first got here,” he recalls, holding out his left arm as if around the shoulders of an imaginary companion, “I was like, ‘This is my best friend, Tourette’s.’”

But with the assistance of understanding instructors like Professor of Management Ann Tuttle, he adopted a strategy of full disclosure, briefly commandeering the class to explain his condition and reduce his anxiety.

“She gave me the floor,” Chris says of Tuttle. “She really helped me feel comfortable in her class.”

Comfort in the classroom mushroomed into comfort in life.

“Now, it doesn’t affect me as much … I don’t have to explain myself,” Chris says. “That’s the value of living on campus; you get to know the community more … especially at a smaller school like Keuka College. I used to say, ‘this is my family,’ because -- it is!”

A flare for fellowship

Some of his closest College family members were at the Center for Spiritual Life, where Chris was active his entire four years on campus. He credits Eric in particular for support and guidance.

“Eric was the one guy, if the counseling offices were closed or my RA wasn’t around, I could always talk to him,” says Chris.

Eric calls that interaction “a privilege.”

“He’s just got a genuine heart for people; he’s talented, gifted and a great listener,” the chaplain says. “It’s been a privilege to know him and to have a chance to see him grow.”

Today, Chris hopes to follow in Eric's footsteps, setting his sights on his own congregation.

“I recently discovered through prayer and careful meditation that I (am) going to be a pastor,” he says. “I still write music, play guitar and sing, but I’m focusing on that aspect of my life more right now.”

He leads worship at the nondenominational Consuming Fire Church, and is working to hone his speaking and shepherding skills.

“I’m more focused on the pastoral aspect,” Chris says. “That’s the current path in my life.”

Wherever that path leads, Chris believes his time at the College well prepared him for the journey.

“Just being involved with the team here has given me perspective on being part of the team at my home church,” he says. “If I had any advice for recent graduates or freshmen, it would be that you never know where your degree or your extracurricular activities at Keuka College will take you.”