A Special Day with Special Olympics 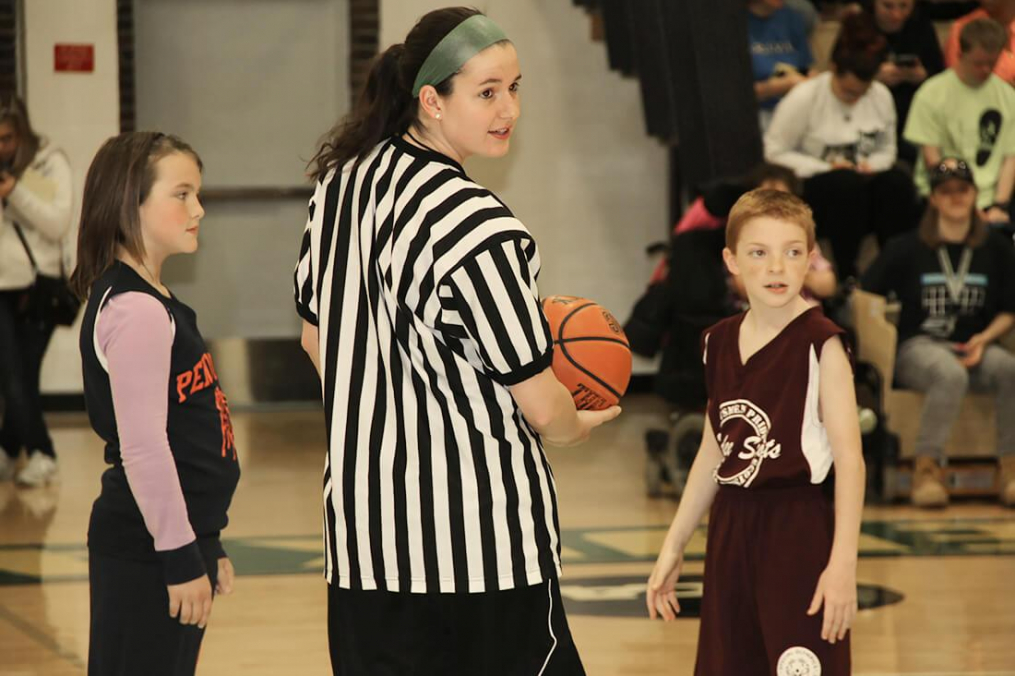 During the third annual event, those seven words were repeated throughout the day, as an embodiment of the spirit of the Special Olympics, where children with various physical and developmental disabilities play sports simply for love of the game—in this case, basketball.

During the tournament, third to sixth graders at the Penn Yan and Dundee school districts met on the basketball courts at the College’s JMW Recreation and Athletics Center and celebrated athletes of all levels and abilities.

Vice President for Enrollment Management and Student Development Mark Petrie welcomed the crowd and shared the motto of the Special Olympics: Let me win, but if I can’t, let me be brave in the attempt. He also received a certificate acknowledging the College’s role as the host of the event.

“It is a special day founded on collaboration and teamwork,” says Chris Paige, director of special programs at Dundee Central School and a 1998 graduate of Keuka College. “Believe in What We Can Do Together is truly what today is all about.”

“This is a great community activity and an opportunity to have people visit our beautiful campus. The men’s and women’s basketball teams were able to help assist the kids, either by offering tips or officiating the games,” says Coach Gaffney.

Three unified teams from each school competed, with the Penn Yan students sporting blue or orange jerseys, while the Dundee teams wore their school colors of maroon and white. Each team played two games, while several students with disabilities participated in a skills clinic.

Dundee Middle School seventh graders Korina Bassett and Viviemne Hoad, both members of their school’s basketball team, chose to participate because they believe that by playing sports such as basketball, they can help everyone feel included every day.

“The students from Dundee have multiple handicaps,” says Mr. Paige. “Having them participate in a skills clinic allows them to see the game of basketball being played while learning the basics of the sport. They learned dribbling, shooting, passing, and how to make a free throw. We held a parade before we left the school, complete with a bagpiper leading the way. The whole school came out to cheer for these students—it truly felt like an Olympic event, and they felt like rock stars. I am proud to be part of this.”

Students in Keuka College’s DRIVE program were on hand to cheer for their friends. The DRIVE program (diversity, responsibility, inclusion, vision, and experiential learning), is a collaboration between the Yates County Arc, the College, and Penn Yan Central School District. The DRIVE program provides 18-21-year-old special education students an opportunity to assimilate into the college environment and explore their personal goals.

At the closing ceremonies, each participant received a medal, with the team from Dundee Middle School edging out Penn Yan Middle School. Both unified teams from Penn Yan Elementary School came out on top. The winners of the skills clinic were also recognized.

“The efforts between the schools and Keuka College truly celebrate the idea of inclusion and teamwork,” adds Mr. Paige. “The idea of Special Olympics appeals to me because I am passionate about inclusion, and the three schools really support those with all abilities by including them in everything. An event such as this proves that, and builds meaningful participation in the spirit of sportsmanship.