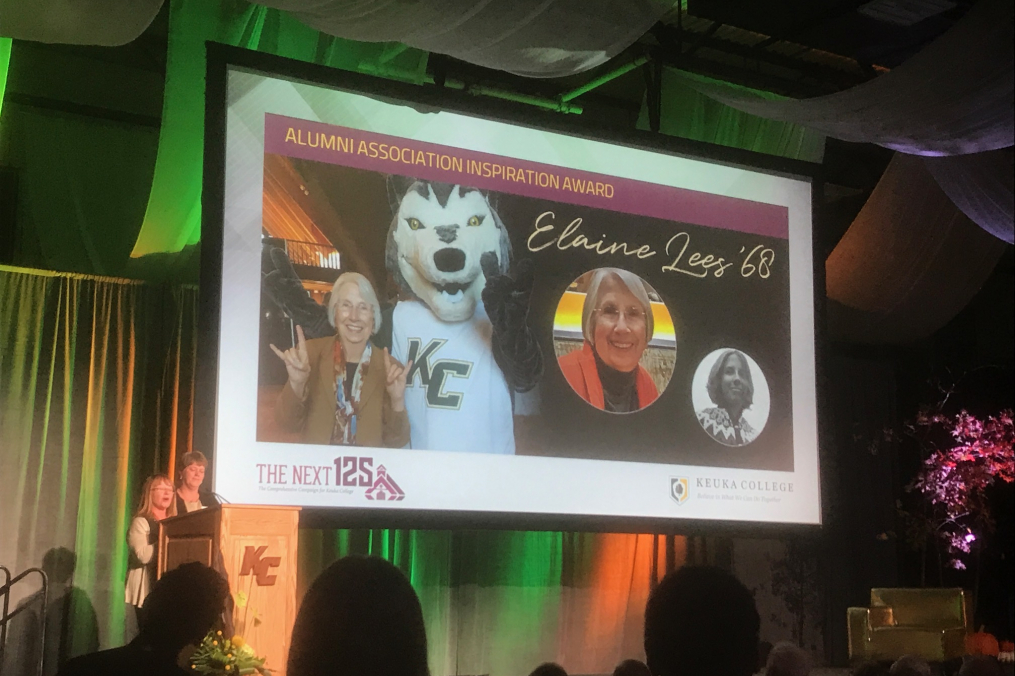 One definition of the word inspiration is “the process of being mentally stimulated to do or feel something, especially to do something creative.” Another definition was the late Elaine Lees, a member of the Class of 1968.

Elaine graduated from North Allegheny High School in June 1964 and developed a love for the College that began even before she enrolled that September. It was a love that endured a lifetime.

In the 2007 Reunion Booklet, alumnae were asked to share a special memory of Ball Hall, and for Elaine, it was the first time she saw the lounge on the first floor.

“It was during my visit to the campus before I enrolled,” she recalled. “The sun was shining in the tall windows, and I thought it was just beautiful.”

Beautiful, like Elaine’s attitude. She always thought about others before herself.

While facing health issues, for example, one of her chief concerns was about her ability to continue to serve on the Alumni Association Executive Council, which she joined in July 2015.

Elaine was a dedicated Class Scribe for Keuka College magazine, and classmates talk about how meticulous she was at keeping the College Community informed about class happenings. It was not uncommon for the Class of 1968 coverage to dwarf that of other classes in the Class Notes section of the magazine.

She was also a class reunion co-chair and, always, an inspiration to her classmates, they say.

These are just some of the reasons Elaine was honored posthumously with the Alumni Association Inspiration Award at the College’s Green & Gold Celebration Weekend gala on Friday, Oct. 13.

The award has been bestowed only once before -- six years ago, to Barbara Sharman Mortensen, Class of 1955.

The inspiration award is presented to an alumna who has inspired others with their dedication to their profession (she was a lifelong educator), unwavering support of Keuka College, and insistence on keeping the College alive in everything they do.

Elaine excelled at all three, and seemed to be a continual presence on campus.

A great admirer of the symphony and modern dance concerts, Elaine was a regular at the College’s annual Rochester Philharmonic Concert. She could also be seen at such College events as the President’s Forum and Carl and Fanny Fribolin Lecture, and was a participant at the College’s Leadership Weekend.

A member of the Keuka College Leadership Circle, Elaine participated in the College’s Adopt-A-Student Program, along with many other members of the Class of 1968. She was also part of the Class of 1968 group that was instrumental in raising money for the swing at Point Neamo, dedicated in memory of classmate Karen Grimm.

Elaine inspired her family, including her husband, Andrew Gurcak, daughter, Jessica Sedgewick, Jessica’s husband, Robert, and her grandchildren Henry, Peter, and Rose. Her inspiration spread to classmates, coworkers, friends, and the many others who were lucky enough to have met her.

Her passing in 2017 was a blow not to her family, many friends, and alumnae, but to the entire Keuka College Community.

Elaine was a brilliant, dedicated alumna, and she will live on forever, both in the hearts of her loved ones and at Keuka College.