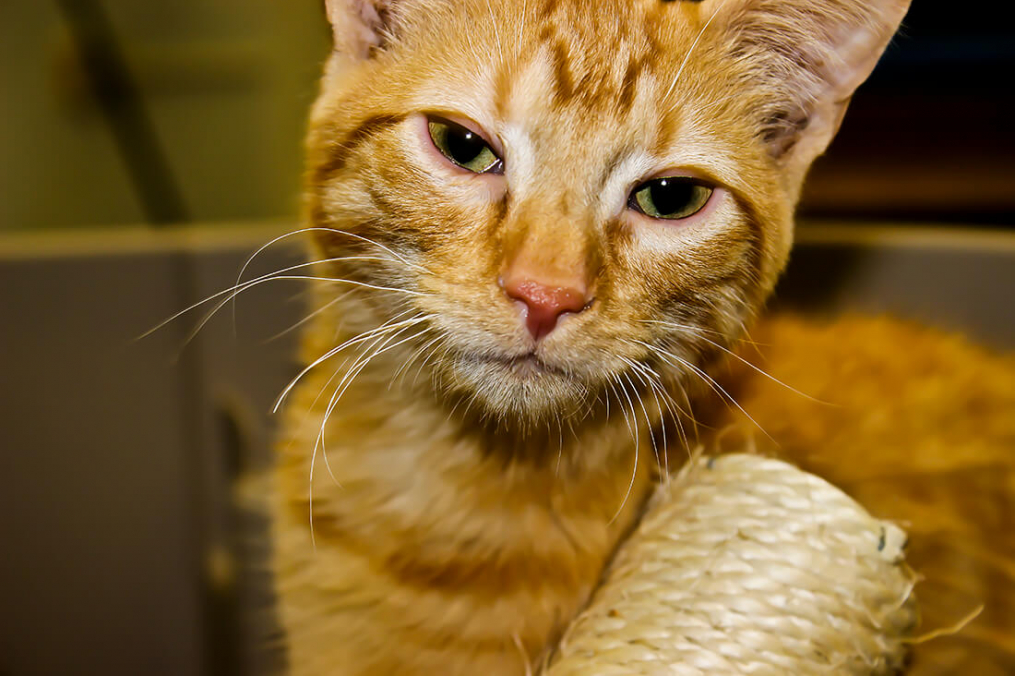 Like many kittens, one-year-old Red is inquisitive, likes to chase a laser pointer, and will do just about anything for tuna. He loves to climb, be held, survey his surroundings, and have his chin and ears scratched.

But unlike many kittens, Red has feline cerebellar hypoplasia (CH), which affects his ability to maintain his balance, walk, and be safe in his environment.

And while feline CH may sound devastating, particularly because there isn’t a cure, Red has a bright future ahead of him thanks to a partnership between Keuka College’s Division of Occupational Therapy (OT) and the Humane Society of Yates County Shelter of Hope.

Dr. Carrie Roberts, assistant professor of occupational therapy, Aidan McCown, a senior occupational science major from Canandaigua, and Michael Bennett, a staff member at the shelter, have teamed up to give Red the best possible life.

“As we’ve come to understand it, Red has a moderate to severe case of cerebellar hypoplasia, in which his cerebellum is not effective in coordinating his motor impulses,” says Aidan. “His brain is telling him what to do, but his muscles can’t translate the command into action. It’s kind of like human ataxic cerebral palsy, which impacts cerebellar structures.”

“The reason Keuka College’s occupational therapy program is involved with helping Red is because as occupational therapists, we deal with people who have similar problems with motor planning and coordination,” says Dr. Roberts. “The humane society was looking for someone to help make suggestions to increase Red’s abilities and keep him safe.”

To compensate for Red’s lack of coordination, Dr. Roberts and Aidan developed an adapted climbing structure that utilizes the kitten’s strengths while accommodating his limitations. The structure is a large tote covered with rugs, with a hole on one end for Red to crawl through and explore the variety of activities there for him. Because he is unstable, he has several cylindrical and triangular supports to help him balance as he moves.

“This is a safe way for Red to explore, play, and climb—perhaps his strongest skill,” says Dr. Roberts. “This allows him to be a kitten and have fun while remaining safe and gaining valuable skills. It was made to try and give him something fun and catlike to do while building up his strength.”

“The idea of a maze to increase his sense and orientation to being upright was attempted,” says Aidan. “However, Red’s whiskers provided sensory input from the maze that caused his motor response to be more hazardous than helpful. Mobility devices were also attempted, but just trying to get the cumbersome equipment on him tired Red out quickly.”

Aidan admits that at first, he was focused on Red’s deficit.

“Red could not walk more than a couple of steps, he was shaky, had poor muscle tone, and we needed tools to compensate for this,” says Aidan. “I was even a little resistant when the maze idea didn’t work out. But actually watching him on the carpet, it was clear that Red would get better if he was given the opportunity to do what he was good at. Focusing on Red’s strengths and interests as opposed to his condition embodies this concept, and the effectiveness of it for Red solidifies it further.”

Depending on the severity of their CH, some kittens may be limited in ability and must learn how to do things differently. For example, some CH cats don’t have the coordination to jump, so they become great climbers instead.

Such is the case with Red.

“His retractable claws allow him to maintain positions and hold himself in ways that walking does not,” says Aidan. “In constructing a climbing obstacle course, we hope Red will develop, through conditioning, a better sense of balance and strength. More than that, we hope he will be able to enjoy being a cat.”

Adds Aidan: “This is what occupational therapists do. I think it is our passion. There are many people who, by genetics, injury, or illness, find themselves in unconventional situations. Like we are doing for Red, we focus on strength and motivation. By doing this, we can utilize unconventional means to help individuals, like Red, function more effectively in what they want to do.”