Justin Latz '19 Explores the Administrative Side of Official Police Business

The senior designed his Field Period® experiences to integrate his double majors in criminal justice and management. 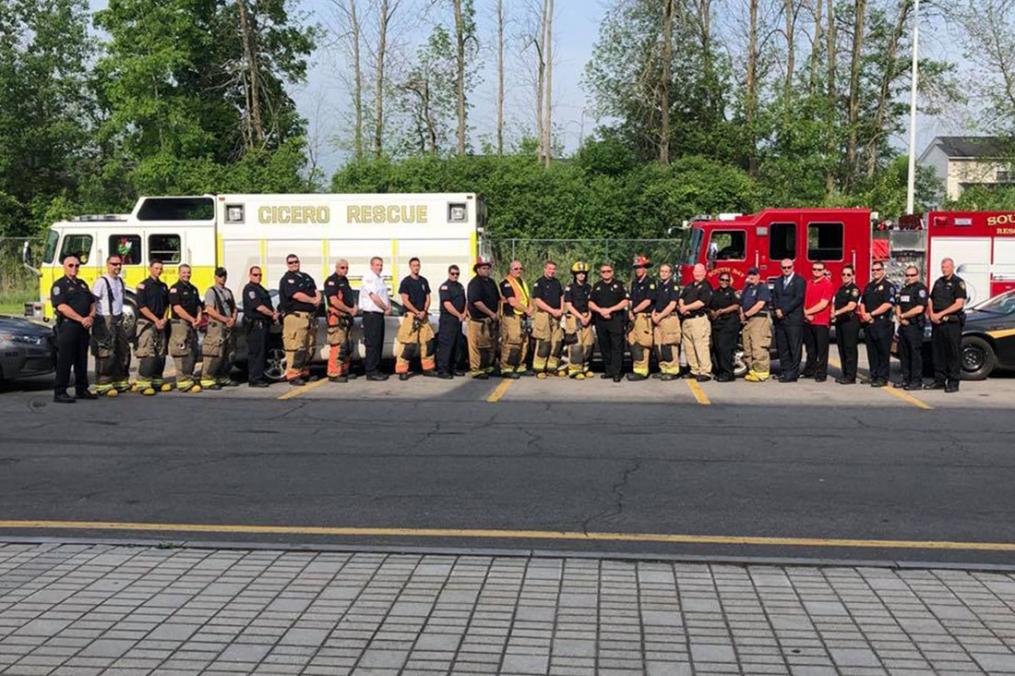 Justin Latz '19 poses with members of the Town of Cicero's fire and police departments. Through Field Period®, Justin was able to learn the ins and outs of both departments.

At Keuka College, Field Period® is an important part of each student’s educational foundation. Established in 1942, Field Period®, the annual, self-designed experience, gives undergraduates time to explore their interests, and can help confirm a student’s career goals or modify their plans prior to graduation.

Justin Latz, a Keuka College senior, took those principles to heart. Each of his four required Field Period® opportunities offered him the chance to explore both of his career interests—business management and criminal justice.

For example, for two of his Field Period® experiences, Justin, a double major in business management and criminology/criminal justice, explored two different areas of the Town of Cicero Police Department. His first Field Period® focused on the investigation and patrol functions of the department, while the second centered on the administrative side.

“I rode along with officers, observed various investigations, and learned the process the department uses to hire a new part-time officer,” says Justin, a Cicero resident. “I also saw the department go through an accreditation, which only happens once every five years, and was very interesting.”

In addition, Justin participated in several police department public relations events, including the dedication and open house of the department’s new building, and an event at the local high school.

He credits his Keuka College classes with introducing him to concepts he translated into the “real world” during his Field Period® experiences. In turn, he used his Field Period® opportunities to delve deeper into what a future career could look like.

In fact, Justin’s first Field Period®, at the Onondaga County Department of Emergency Communication Center—the county’s 911 center—is where he hopes to land a job after commencement.

“I am currently on the civil service list for the Onondaga County Department of Emergency Communications in the hopes that after graduating, I will be hired,” says Justin, who saw both the daily operations and the administrative side during his Field Period®.

“I sat with call-takers and dispatchers as they answered emergency calls, and observed a new dispatcher training program,” he says. “I was also able to assist with the accreditation process, which was both interesting and complex.”

Another Field Period® was with the Cicero Volunteer Fire Department, working with Chief Jon Barrett.

“I learned about various aspects of the administration of a public service agency,” says Justin. “I was able to work on updating and revising their policies, as well as creating several additional policies to fill in the gaps. I also attended several different leadership and administrative meetings.”

Justin was also tasked with securing funding for equipment through a grant. This grant was ultimately approved for more than $15,000 to purchase new equipment.

While he learned a lot about the inner workings of a fire department, Justin says the highlight of this Field Period® was being able to take a trip with members of the senior leadership to see where the fire department’s gear was made.

“On this trip, I gained a better understanding of how the gear was made, and the vigorous testing that is done before being shipped to fire departments,” he says.

Because of his Field Period® experiences, Justin says, he’s been able to do “many amazing things. I believe Field Period® was important to introducing me to things that I would learn more about in classes.”

Armed with the knowledge gained in both his Keuka College classes and his Field Period® opportunities, Justin has his eyes on his future.

“My long-term goal is to advance in the organization I work for, and become a supervisor or leader,” says Justin.

Want to Learn More about Our Criminal Justice & Management Degrees?