A Platform for Women’s Voices, Views 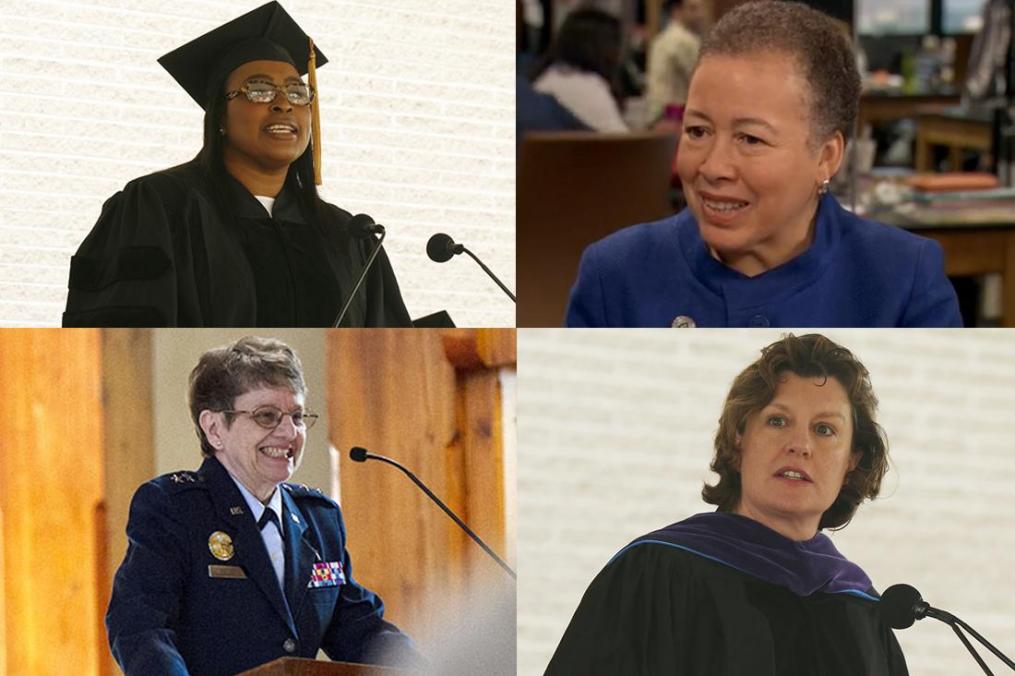 After nearly three-quarters of a century as a women-only institution, and with a current women-to-men ratio of 3:1 among its students, Keuka College has long been a beacon for strong women leaders.

From first lady Eleanor Roosevelt to Civil Rights icon Coretta Scott King to former first lady and Secretary of State Hillary Rodham Clinton, the College has a history of attracting and providing a platform for leaders who exemplify vision, strength, and leadership through word, deed, and example.

That practice has continued to this day, with the College routinely hosting women of regional and national distinction to address students and the greater community at signature events including Commencement, Convocation, the Baccalaureate Service, and the annual Fribolin lecture.

“It’s important for our students to hear a wide range of voices,” says Interim President Amy Storey. “And it’s important that those voices include the many women in positions of influence.”

That’s certainly been the case at the College’s annual Commencement ceremony, where students and families have heard from the mayors of two of the state’s “Big Five” cities the past two years: Rochester Mayor Lovely Warren and former Syracuse Mayor Stephanie Miner.

Both challenged graduates to use the skills and expertise infused in a Keuka College education to tackle modern-day challenges.

“The real world that you are entering into, and the question you will be forced to confront is, how are you going to respond (to the challenges of partisanship, confrontation and diminishing civic discourse)?” Miner asked the Class of 2017. “And my suggestion to you is that you remember what it means to be an American. … (And) to remember that, to be an American is aptly summarized by your alma mater’s slogan: ‘Believe in What We Can Do Together.’”

Speaking one year later, Warren urged graduates to answer the responsibilities of citizenship.

“Graduates of 2018,” she said, “you must realize that your duty in this country is not simply to get a good education. But it is your moral obligation to vote. You are not allowed to sit on the sidelines.”

The Keuka College community routinely hears powerful words from powerful women. Whether it is Board of Trustees Vice Chair Aqua Porter delivering the 2018 Baccalaureate Address or Maj. Gen. Lorraine K. Potter ’68, retired Chief of Chaplains for the U.S. Air Force, urging students to “Reach for the stars and be the best you that God intended you to be” during a pre-Green & Gold Celebration Weekend address this past September.

The College’s legions of accomplished and acclaimed educators also add daily to the content and context of educational discourse, both inside the classroom and on wider stages. Incoming students, for example, learn life lessons during the annual Academic Convocation ceremony from academic standouts like 2017-18 Professor of the Year Dr. Jennie Joiner and the 2016-17 Professor of the Year Dr. Janine Bower.

And, of course, Interim President Storey herself spreads the gospel of a Keuka College education not only on campus, but at regional and national functions and, during her visits to partner colleges in China and Vietnam, around the world.

She is the third women to lead the College, taking up the torch first lit by Dr. Katherine Gillette Blyley, the College’s first president who served from 1947-58.

This spring’s Fribolin Lecture will carry on the tradition.

Educator and scholar Dr. Beverly Daniel Tatum, author of “Can We Talk about Race? And Other Conversations in an Era of School Resegregation” and “Why Are All the Black Kids Sitting Together in the Cafeteria?” will discuss how race relations continue to affect American education during the annual address this May.