Dr. Kirk oversaw the establishment of men’s athletics at the College. 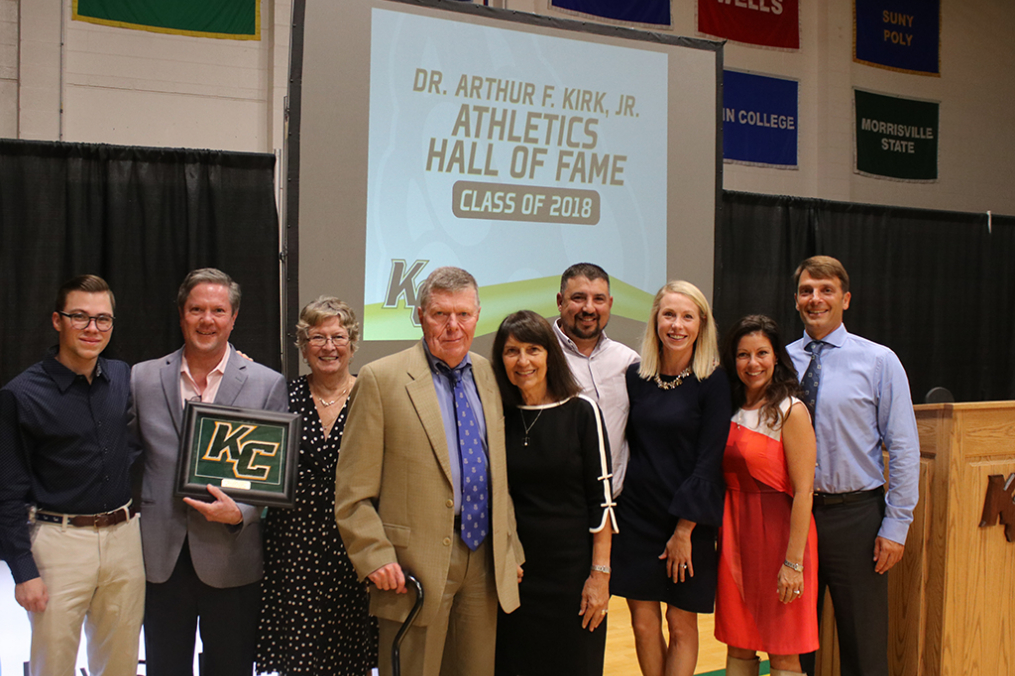 Keuka College President Emeritus Dr. Arthur F. Kirk, Jr. and his family gather at this year's Athletics Hall of Fame induction ceremony, during which the hall was renamed in honor of Dr. Kirk.

Dr. Kirk, who holds the title of president emeritus, served as the College’s 16th president from 1983-96. He was selected for this year’s Hall of Fame class as a Distinguished Service inductee. His induction – as well as the naming of the hall in his honor – is in recognition of the key role he played in the development of the College’s Athletics program.

As president of Keuka College during its first decade as a coeducational institution – the College was women-only until 1985 – Dr. Kirk was a driving force for the establishment and growth of the athletics program in general and men’s athletics in particular.

The College first added men’s basketball in 1985 – with Dr. Kirk hiring David Sweet as head coach and Director of Athletics, the latter a position he holds to this day.

Over the next several years, the College also instituted men’s lacrosse (1988), softball (1988), and men’s soccer (1990), as well as moving all of its programs to full-time NCAA Division III status.

“If Art Kirk wasn’t in the president’s chair in the 1980s and ’90s,” said President Storey, “the College’s Athletics program wouldn’t be where it is today.”

The Hall of Fame was established in 2006 and, including this year’s honorees, numbers 41 inductees.