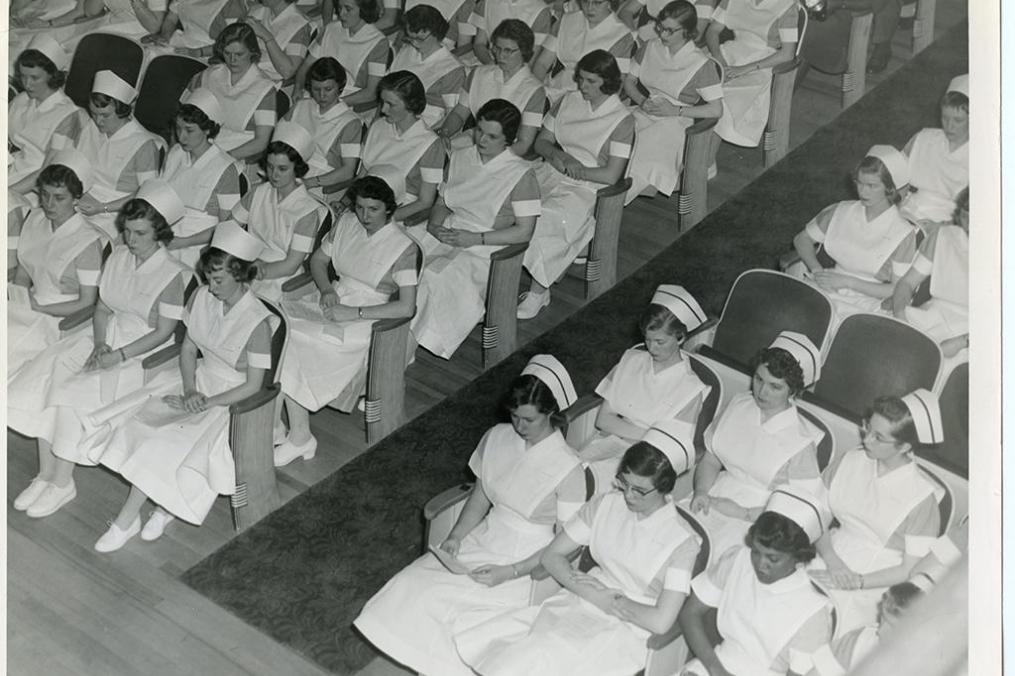 Keuka College has a remarkable history. The story of its Nursing program, which marks its 75th anniversary in 2018, is a history within that history.

How many colleges, after all, can say a first lady prompted one of their courses of study? Keuka College can.

It was none other than Eleanor Roosevelt who suggested the program to Keuka College President J. Hillis Miller in June 1940. By 1943, a U.S. Cadet Nurse Corps had been established on campus to respond to the nursing shortage created by World War II.

As such, it fit in perfectly with the College’s longstanding commitment to public service and social justice. As Dr. Philip A. Africa put it in his 1974 history of Keuka College, “A Keuka education would continue to be linked with an obligation to serve.”

The program launched in February 1943, making Keuka College the second collegiate school of nursing in the state. As such, it was big news. “Keuka Girls Start Nursing Course,” blared a (patronizing-by-today’s-standards) headline from the Rochester Democrat and Chronicle of Feb. 24, 1943.

The glamor of media attention quickly gave way to intense instruction, along with the type of experiential learning Keuka College is famous for.

“For the first three years, the program operated 50 weeks a year with two weeks’ vacation,” recalled Jacqueline Baker Humphrey ’46, a member of that first class. “We participated six days a week, which was the normal work week at that time.”

Jacqueline says the students became well acquainted with the Keuka College bus, which took them for clinical training to hospitals in Penn Yan and various other local municipalities.

“The class was divided up,” said Virginia Timms Holliday ’46, who, like Jacqueline, was recalling her experiences in written memories collected for the program’s 50th anniversary in 1994. “And we rotated between Geneva, Clifton Springs, and Canandaigua.”

Other affiliations included the Binghamton City Hospital (for training in pediatrics), the Willard State Hospital east of Seneca Lake (for psychiatry), and the Hermann Biggs Memorial Hospital in Ithaca (for communicable diseases).

The studies could be grueling. Among the memories Anne Tarr Getman ’51 shared were, “On duty at 7 a.m. and working split shifts (7-11 a.m. and 7-11 p.m. with classes in between),” “working weekends, holidays, and on-call for OR and deliveries,” and “getting up for surgery at 2 a.m.”

Encouragement came from the likes of U.S. Surgeon General Thomas Parran, who sent a telegraph sharing his gratification for the students’ dedication to Nursing Division Director Dorothy Felt in 1944.

“By performing nursing duties in hospitals where you are studying, you are helping to relieve critical nursing shortages at home,” he wrote. “The nation salutes you for your two-fold contribution to its health and welfare. You have enlisted in a proud and challenging profession. May you always serve it with wise hands, clear heads and steadfast hearts.”

That is just what Keuka College’s graduating nurses did, and continue to do.

By 1949, the program was among the top 25 percent in the country for basic nursing training.

More recently, the program has joined forces with the Finger Lakes Health College of Nursing and Health Sciences to create a unique dual-degree partnership. This program has proven so popular that new facilities are being renovated on campus to meet the influx of students.

Reflecting on her days as a Keuka College Nursing student, Jacqueline Baker Humphrey, of the school’s first graduating class in 1946, said, “I remember being called out on an evening ambulance call and delivering a baby on my own, at a farmhouse in Canandaigua. Needless to say, our practical experience was substantial. When we graduated we felt equal to any challenge.”

While the Nursing program has grown and adapted in many ways, its foundational tenets remain intact.

Now, as when the program started, dedicated Keuka College faculty infuse students with inspiration as well as instruction.

Now, as then, the College is pivoting to meet existing needs.

Now, as then, students are combining real-world, hands-on nursing experience with intensive studies. And they are graduating from Keuka College, as Jacqueline Baker Humphrey did 72 years ago, “equal to any challenge.” 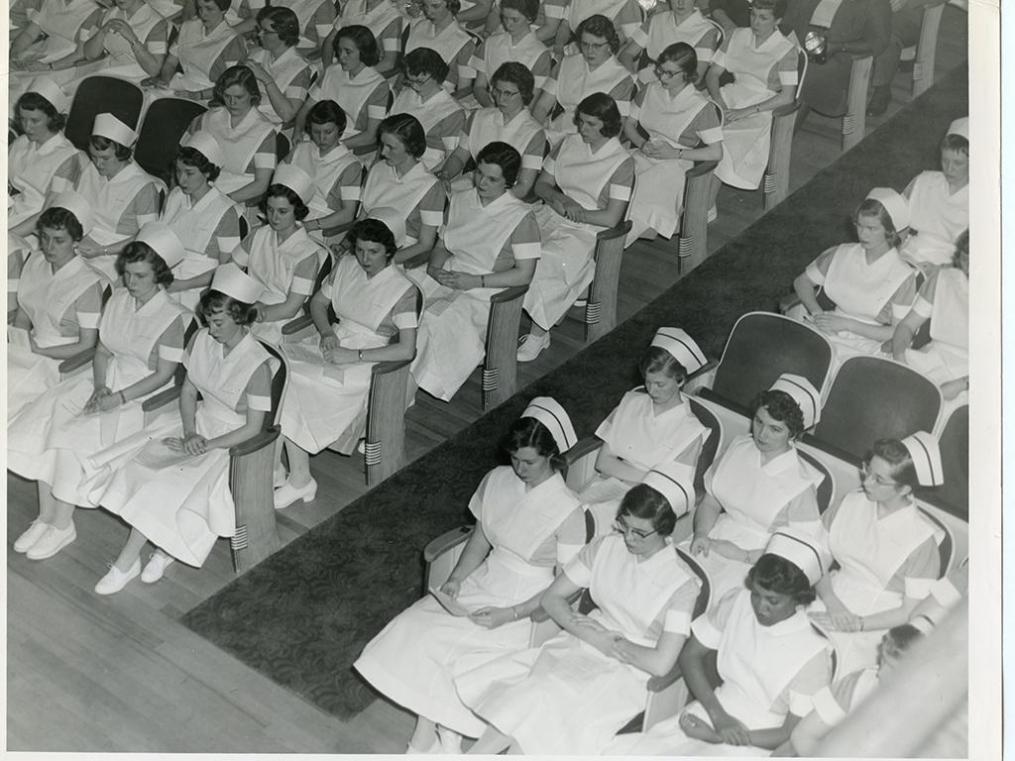 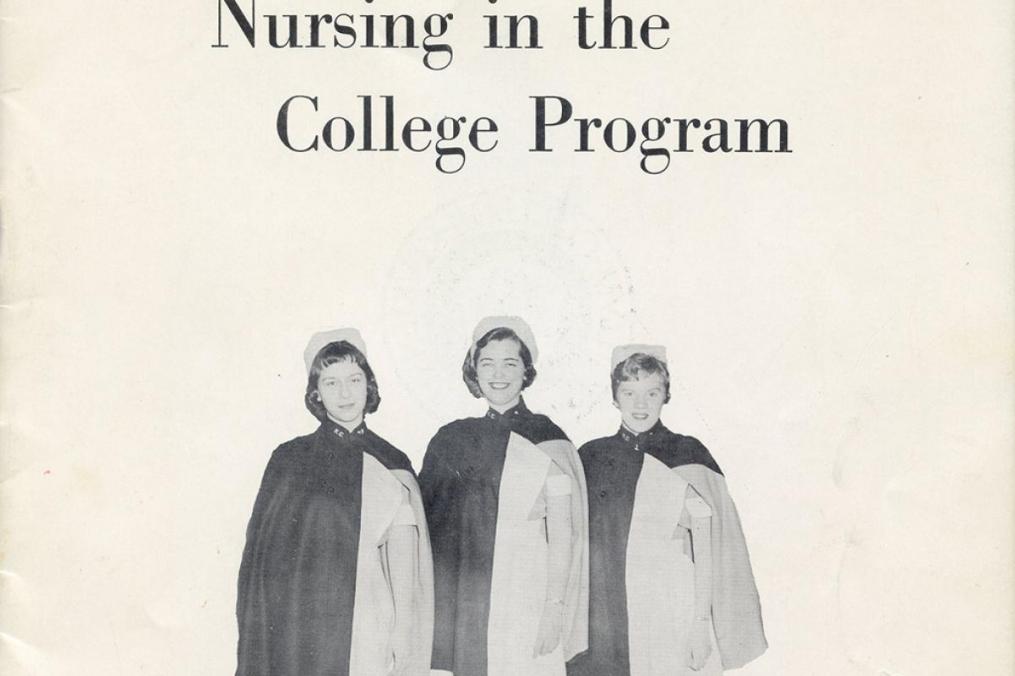 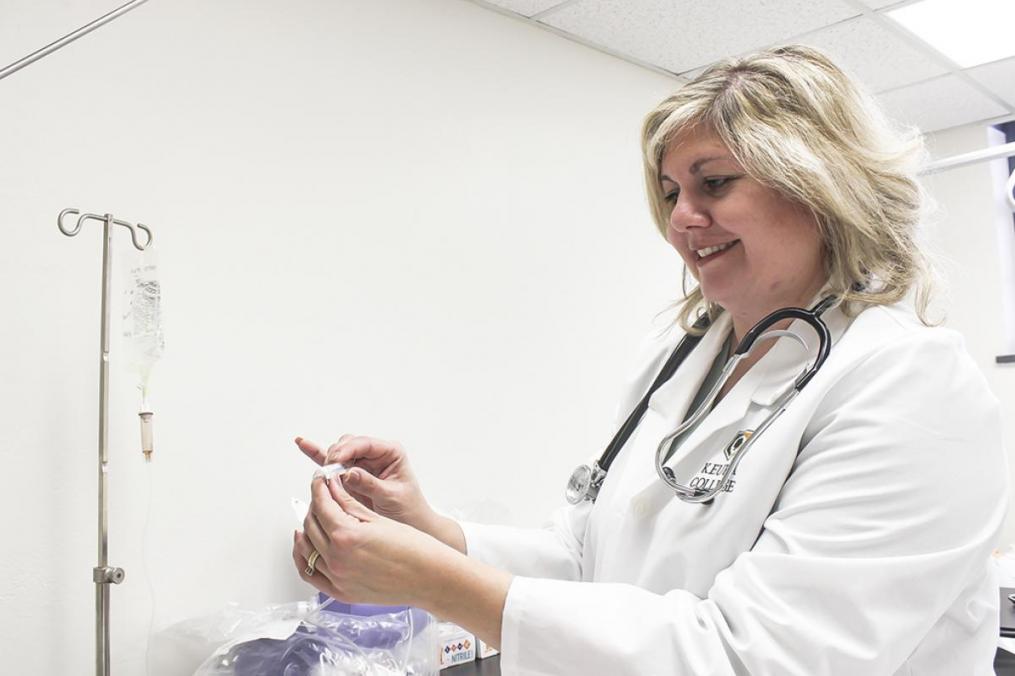 Today, the Division of Nursing is chaired by Professor of Nursing Dr. Beth Russo '98. 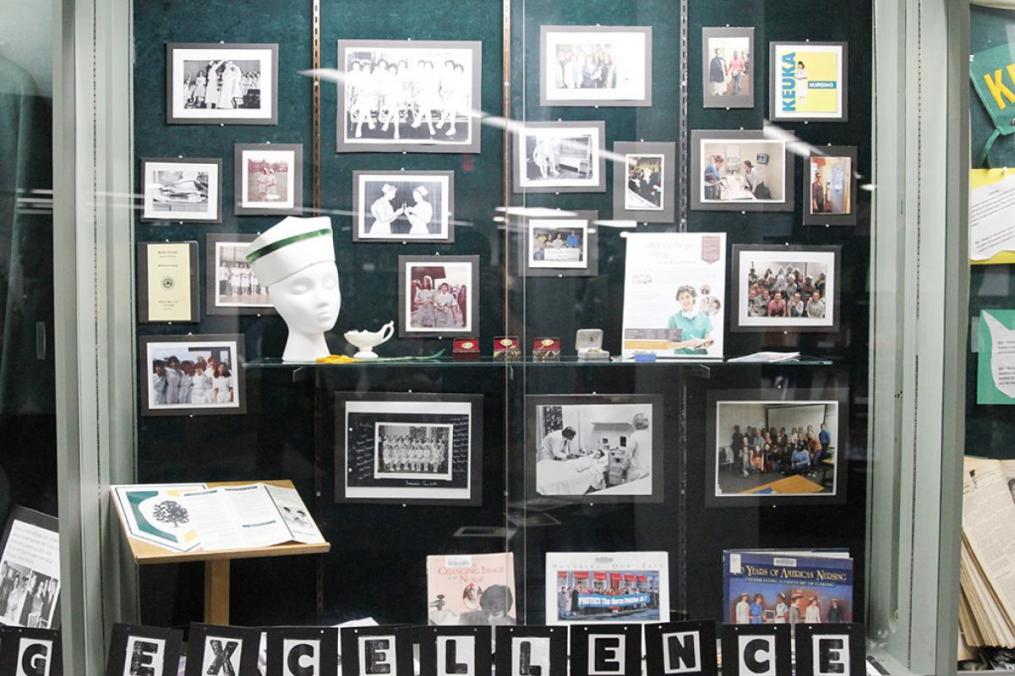 The Nursing program's 75th anniversary is the subject of ongoing commemoration, including this display at Lightner Library. 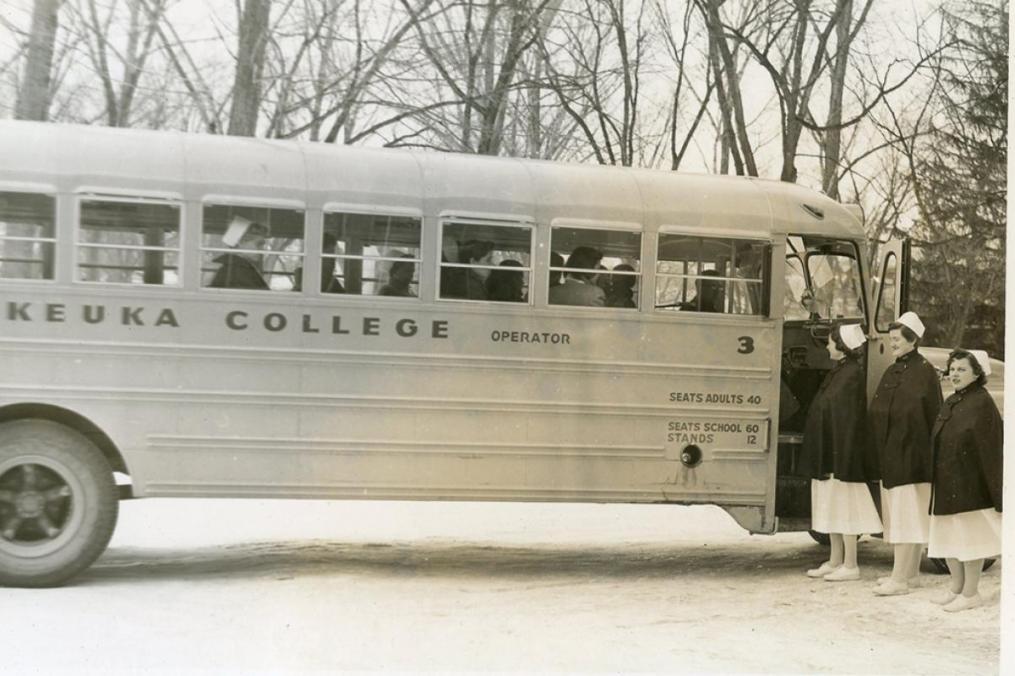 Bus trips to regional hospitals were long a part of the Keuka College Nursing program. 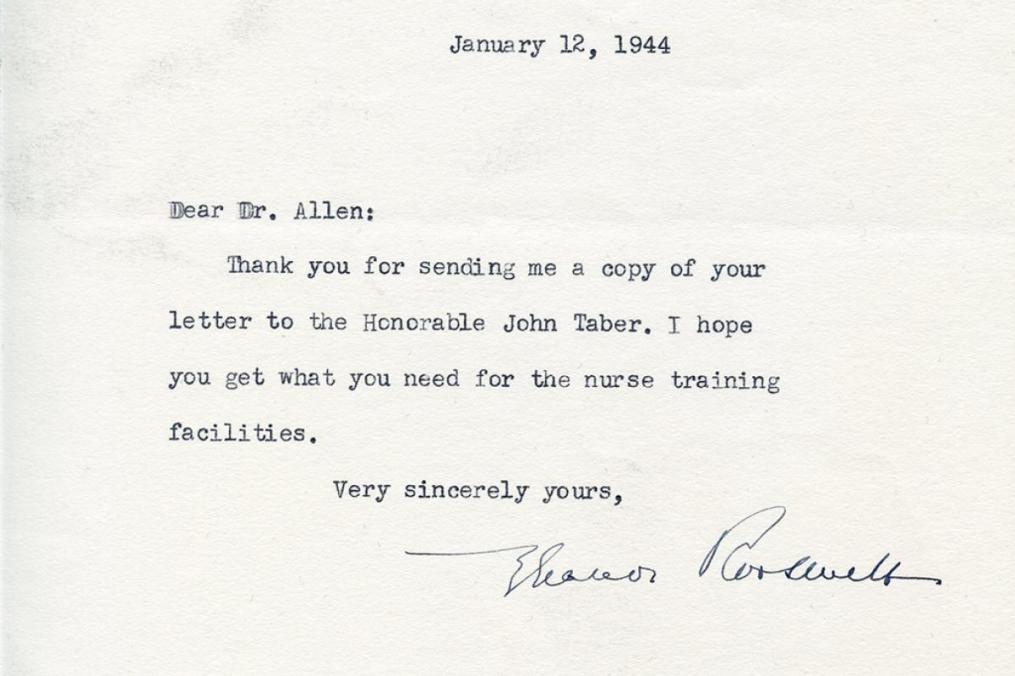