Nursing was the only profession she ever considered. 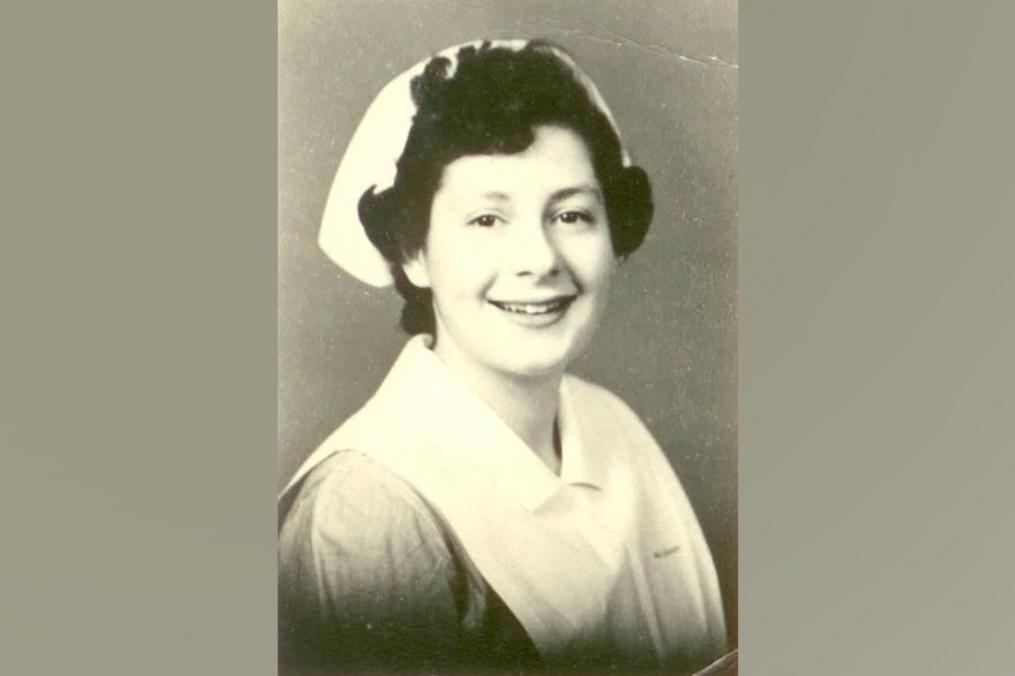 Joan Edwards Hulkower '52 in her uniform.

Joan Edwards Hulkower has known she wanted to be a nurse since she was 14. That’s when Joan, a member of the Keuka College Class of 1952, had her tonsils removed.

“The nurse was so good to me, so nursing was the only profession I considered,” said Joan. “I never looked right or left, and it worked out for me. It was the right decision for me.”

Joan’s mother thought nursing was a fine profession for her daughter, but she insisted Joan get a college degree. And Joan didn’t look anywhere but Keuka College for her college. She would be the second in her family with a Keuka College connection.

Joan’s mother had a cousin, Dr. Edith Vogl, who was a music professor at the College in the early 1940s. Originally from Prague, Czechoslovakia, Dr. Vogl was a noted musicologist. She came to the United States as director of music for the Czech Pavilion at the 1939 New York World’s Fair. She remained in the United States after Czechoslovakia was overrun by Nazi Germany. With the help of Eleanor Roosevelt, she became an instructor of art and music at the College.

And it was at the suggestion of Mrs. Roosevelt that the College begin a nursing program in 1943. Just five years after that suggestion, and seven years after her arrival in the country, Joan enrolled in the College in 1948.

Like cousin Edith, Joan and her family were natives of Prague.

“I arrived in the U.S. in 1941, and I was able to escape [the Nazi persecution of the Jews] with my parents, luckily,” says Joan, whose family settled in Queens.

While Queens is far from Keuka Park, Joan found many friends on campus, including among the faculty.

“One professor in clinical instruction, held our hand and was so kind,” says Joan. “Dorothy Felt, director of the nursing program, was our science teacher. We dissected animals in biology, and we took anatomy.”

She says her studies went year-round.

“We spent the first two years, including summers and winters, on campus,” says Joan. “Our next two years, we rotated from one hospital to another, working in the tuberculosis units, as visiting nurses, and in medical and surgical wards in Geneva.”

After graduation, Joan returned home and worked at New York Hospital on the east side of Manhattan. She also worked in the operating room at Mount Sinai Hospital, as well the operating room and in the gastroenterological department at Forest Hills General Hospital, where she would later become head nurse.

“When I was pregnant and couldn’t work on the floor, they created a job for me where I could sit and schedule operations,” she says. “It worked out for me, and after my children were born, I worked there every other weekend. I also filled in the office when needed. Nursing offered flexibility in my life.”

She also credits her husband, Bernie, with being able to work part time while her boys were little.

“Bernie was a lawyer and a hands-on father,” she says. “Bernie died in 2017 and we were married almost 62 years. I led a good life and worked when I wanted, or needed to. It’s rewarding, and I felt like I was helping someone. I stayed in nursing for 44 years, and nowadays, most people only stay a few years, as the job is much more demanding.”

Later in her career, around 1990, Joan worked per diem. That schedule allowed her and Bernie the opportunity to travel, and volunteer in Israel for six to eight weeks for several years.

“Now, I’ve been back 14 times, the latest in January 2019,” says Joan. “I worked in a rehab hospital serving breakfast, and assisted patients who needed help walking.”

Joan continues her volunteerism at home. During Jewish holidays, and three to four times a year, Joan will send packages to families in need. That spirit of caring for others is one reason she chose nursing.

“Nursing worked out well for me, and it was always there when I needed it,” she says. “This was my way of helping, and I had no complaints. I loved my years at Keuka College. It was different from what I had known, and the friendships I made, well, you can’t put a price on those.”

There is no doubt Keuka College holds a special place in Joan’s heart.

“When I was at Keuka College, it was a very small girls’ college, and there weren’t too many of us from New York City,” she says. “I spent the best summers there, but the winters were difficult. We made the most of it, though, as before the (JMW Recreation and Athletics Center) was there, we’d ski down the hill. Because Keuka College was such a part of my life, Bernie and I went back many times for reunions, and always continued our College friendships.Keuka College is a wonderful place and I loved it there.”