The Class of 1997 alumna spent time as a traveling nurse and worked with Doctors Without Borders. 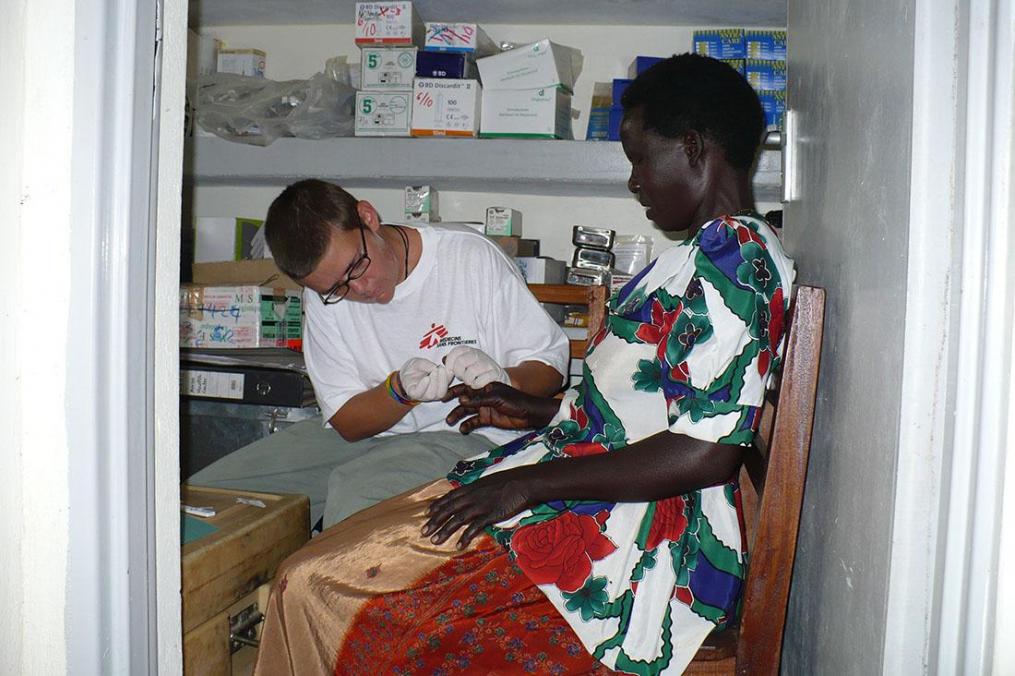 Kellie Lamoreau '97, left, conducts a paracheck (Malaria test) on a patient in Uganda.

Kellie Lamoreau ’97 may not remember how she heard about Keuka College—“maybe from a brochure?”—but she will always remember the education she received, and the people she met during her time here.

“I’ve known Kellie since she was a freshman,” says Linda, who worked in Keuka College’s student affairs department. She also served as the director of The Birkett Mills/Keuka College Challenge Ropes Experience, better known as TeamWorks!

“Kellie trained with several other students to become a facilitator for TeamWorks!” says Linda, who remains friends with Kellie. “She was an insightful and patient facilitator for many different groups at TeamWorks! She provided quiet guidance and reassurance. Her happiness and bright spirit drew people into discussions and debriefings.”

Those attributes would have served Kellie well had she continued as an elementary education major. But after talking with some nursing students, and learning more about the program, Kellie changed her major to nursing less than a week into her freshman year.

“My parents had instilled a strong sense of altruism in me from a young age,” says Kellie. “I always knew I wanted to do something service-related. After serving as a certified first responder with a volunteer ambulance corps while in high school, I discovered my passion for the medical/nursing field.”

She carried on that passion through her years at Keuka College. Kellie says she loved her nursing professors, staff, and Field Period® experiences. She also loved the friendly feel of the campus.

“Keuka College felt like an extended family to me, and helped shape the person I am today,” says Kellie. “I chose to spend three of my four Field Period® experiences on units in different hospitals. These in-depth experiences were extremely helpful in determining the areas of nursing which I felt best suited for.”

But Kellie didn’t work as a nurse right away.

“After graduation, I accepted a position as a nanny in Manhattan, much to my parents’ dismay,” says Kellie. “I then took a month-long solo backpacking/hostel trip to Europe. After that, I moved to Tucson, Ariz., where I started my nursing career in medical/oncology.”

After that, Kellie spent three years as a traveling nurse, working several-month stints in various hospitals, cities, and states, including Loma Linda, Calif., Trenton, N.J., Denver, and Syracuse. Each position was unique, she says, and taught her new skills.

“I wanted to work with MSF because I’ve wanted to do international humanitarian aid work for as long as I can remember,” says Kellie, who, as a child wanted to join the Peace Corp. “I enthusiastically applied for MSF after learning about their reputation and work in more than 80 countries, and their strong neutrality policies.”

Kellie has completed four missions with MSF, serving with others on international teams.

Kellie says she and her team lived in huts for two of her missions, and on a roof with about 10 others for another.

“We worked with internally displaced persons both as staff and beneficiaries for three missions, and with refugees in Ethiopia,” she says. “Our stabilization center—the closest thing to an ICU—in Darfur was a ‘building’ made of plastic sheeting, and a sand floor.”

In these structures, Kellie says, moms were holding their babies with IV bags hanging from a skinny wood beam, connected by gauze, with the tubing freckled by house flies.

Kellie returned to Keuka College in November 2006 to share her experiences in Darfur as part of the Values and Ethic Lecture Series and Integrity Forum.

“Compared to standards in the U.S., we had minimal supplies and used what resources we could find, like using popsicle sticks and tape for a pediatric splint, or using IV tubing to create toys,” she says. “I witnessed, and was humbled by, the compassion and kindness of people living under very harsh and dangerous conditions.”

After working in Eastern areas of the world, Kellie didn’t want to return to working in hospitals practicing modern Western medicine. Instead, she became a hospice nurse.

“While on clinical at Keuka College, I witnessed a birth,” says Kellie. “It had a profound effect on me, and was one of the most beautiful events I’ve witnessed. I feel similarly about the end-of-life process. I feel honored to be part of the dying process with patients and their families.”

Kellie will soon begin the next chapter of her life, as she takes a per diem position on a behavioral health unit near her. Still, joining another mission is never too far from her mind.

“Kellie inspire others,” says Linda. “And she defines what it means to serve others and do good in the world.”