Confidence in the Corps 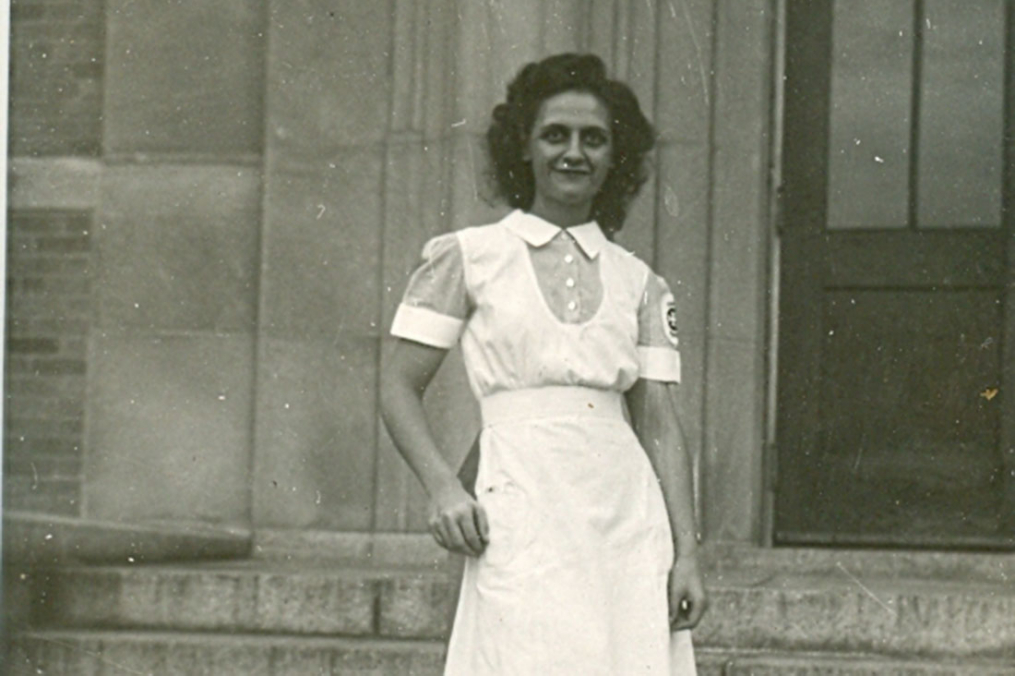 Keuka College has a long, rich history of graduating nurses who are confident, strong, and understand that the profession is more than a job—it’s a calling.

Take Dr. Beth Russo ’98, who is teaching the next generation of Keuka College nurses, or Liz Mance Duxbury ’08, a clinical nurse specialist at Rochester General Hospital, or Raechel Dick ’16, who is a nurse at Auburn Community Hospital.

But none of these alumnae would have Keuka College listed on their nursing resume if not for those who pioneered the way in 1943, when the College’s nursing program began. One of those nurses is Lois Washburn Corey ’46, who, along with 15 other Keuka College students, graduated in the first class of College nurses.

Eight years prior to Lois’ College graduation, First Lady Eleanor Roosevelt visited the campus in 1938, to deliver a lecture and meet with students. In 1940, then-College President J. Hillis Miller wanted Keuka College to contribute to the war effort, should the country be drawn in, but wasn’t sure how. So, he wrote to Mrs. Roosevelt, who replied by urging the College to set up courses in nursing. The College did just that, and during World War II, Keuka College’s nursing program was born.

On March 29, 1943, Rep. Frances P. Bolton of Ohio introduced H.R. 2326, a bill that would “provide for the training of nurses for the armed forces, government and civilian hospitals, health agencies, and war industries through grants to the institutions providing the training.” The United States Cadet Nurse Corps was established by the U.S. Congress on June 15, 1943, and signed into law by President Franklin D. Roosevelt on July 1, 1943. Its purpose was to ensure the country had enough nurses to care for its citizens, at home and abroad, during World War II.

According to Professor Emeritus Dr. Phil Africa’s book, Keuka College: A History, “the training of nurses, of course, melds well with the emphasis Keuka College had always placed on service. The program was immediately taken up by the United States Army, which established a cadet corps on campus in 1943.”

Lois chose Keuka College because she had visited campus, and the cadet-nursing program was just what she wanted to take.

“We girls were excited that the College wanted us, our program, and that we could help the war efforts,” says Lois. “We did meet and visit with other students, but we were known as the ‘nurses’ because we wore our uniforms on campus.”

In fact, nationwide, the cadets’ uniforms were an important part of the recruiting campaign, as wearing the uniform was an outward sign the cadets were committed to the war effort. Keuka College’s uniform was no exception, and Lois was chosen to model the College’s first cadet nurses’ uniform.

Keuka College nurses spent a year and a summer session at both the College and Soldiers and Sailors Memorial Hospital in Penn Yan, followed by two years of residents’ rotation training in surgical, medical, obstetrics, and dietetics at F.F. Thompson Hospital in Canandaigua, Clifton Springs Sanitarium and Clinic, and Geneva General Hospital. The nurses also received training in psychiatric and tuberculosis nursing at Willard Asylum for the Insane, Willard State Hospital, and Hermann M. Briggs Hospital in Ithaca.

“I learned how to work with everyone, from doctors and scrub nurses of course, but also patients like kids and older adults,” says Lois. “Back then, we would sterilize instruments, syringes, etc., and now everything is just thrown away.”

“I spent three months at the United States Marine Hospital, in Stapleton, Staten Island, N.Y., where they were bringing injured sailors,” says Lois. “After the end of the war, I married and worked in a Nashville-area hospital while my husband attended Vanderbilt University.”

Lois eventually returned home to the Victor area and worked with a local doctor, as well as at F.F. Thompson Hospital in Canandaigua. As she raised her family, she was a private duty nurse. Later, she became a school nurse at Victor Central School.

After retiring from Victor Central School in 2005, Lois now lives with her daughter, Debbie.

Although the Cadet Nurse Corps lasted only five years, it alleviated the critical shortage of nurses during World War II, training more than 124,000 nurses—Lois and 143 other Keuka College nurses among them. In the process, it positively influenced the way future nurses would be educated and trained in the United States, and its legacy is still being felt.

This year, as both the College's nursing program and the Cadet Nurse Corps commemorate their 75th anniversaries, the Keuka College nursing tradition continues, stronger than ever. And while Lois and her fellow nurses may not have known it at the time, they were trailblazers during World War II, and in the decades that followed.