As Keuka College’s first woman president, Dr. Katherine Gillette Blyley was committed to “the well-being of the college … and the equality of women.” 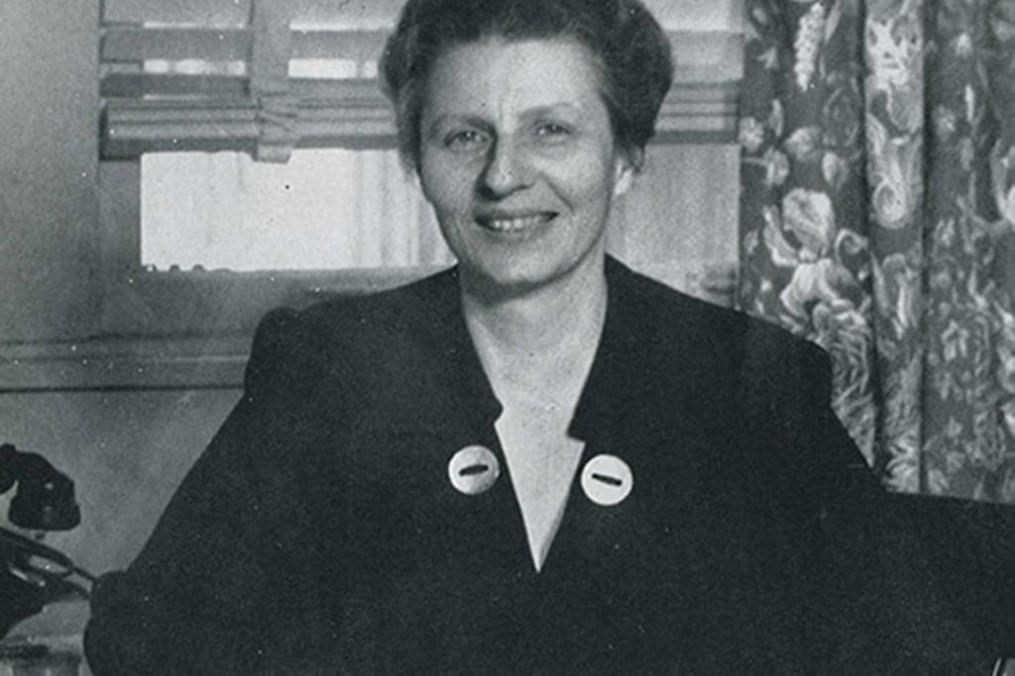 A portrait of Dr. Katherine Gillette Blyley, Keuka College’s ninth president, hangs in the northwest corner of Lightner Library’s Gannett conference room. Images of the College’s first eight presidents – all male – line the length of the south wall. Visages of the five presidents that followed her, again all male, stretch south until interrupted by a window.

Dr. Blyley would no doubt find the company familiar.

In taking the reins as Keuka College’s first woman president in 1947, Dr. Blyley was breaking glass ceilings before the phrase was invented.

“Becoming the first female president of Keuka College in 1947 made Katherine Gillette Blyley a pioneer,” says Interim President Amy Storey, the third woman to lead the College. “She provided true inspiration by acting as a role model to our students who, at that time, were all women. She was the first woman to become a college president in our region. In fact, both the University of Rochester and Hobart and William Smith Colleges just named their first women presidents, who will start in 2019, more than 70 years after Dr. Blyley.”

There were challenges. Then, as now, women were forced to navigate the subtleties of gender politics. Dr. Blyley did this both as the College’s president and, before that, as dean.

“Keuka College president Katherine Blyley … resembled many in disclaiming that her commitment to women deans constituted ‘a feminist point of view,’” wrote Linda Eisenmann in her 2006 book “Higher Education for Women in Postwar America, 1945-1965.” “Even while she advocated an expansion of women’s policy-making influence, Blyley rejected feminist impulses. The connotations of feminism were still too risky for most of the deans.”

Perhaps, but the opportunities that leading the College offered were not lost on the Elmira native.

“For the new president of Keuka College for Women,” wrote the ever-astute Dr. Philip Africa in his 1974 history of the College, “the position would provide further opportunity to demonstrate women’s ability to competently fill major administrative offices in the academic world.”

That “further” is in there because Dr. Blyley had already done plenty of demonstrating. After arriving on campus in 1939 to head the English Department she became full-time dean in 1942. In that role, she was one of the forces behind the College’s signature Field Period® program, an experiential-learning internship opportunity that would turn the world into a classroom for Keuka College students. She also oversaw the early years of the College’s Nursing Program, now celebrating its 75th anniversary.

It wasn’t always smooth sailing. And it wasn’t only her gender that raised obstacles.

“When the first non-Baptist president, Episcopalian Katherine Blyley, was appointed in 1947,” wrote William H. Brackney in his 2008 book “Congregation and Campus: Baptists in Higher Education,” “a storm of protest rose up and some board members resigned.”

Their departures were clearly for naught, as Dr. Blyley occupied the president’s office for more than a decade. She was noted for what Dr. Africa called a “commanding presence” and a devotion to the College and its students.

“She was committed to both advancing the well-being of the College as an institution and the equality of women as a sex,” he wrote.

That commitment is recalled by Keuka College alumnae to this very day.

“(She was) a remarkably talented woman,” Julia Lobotsky ’43 said last month of the educator she called “Dr. B.” “She was passionate about ‘her girls’ – it was OK to be girls then. Dr. B. told us all the time, ‘The world is waiting for you. Don’t sit home. Go out and do great things. You can do it!’”

When it came to her students, “Dr. B” was eyes-open and hands-on. Dr. Africa writes that her concern for students extended to circling the campus by car any time she returned from a trip and “her hospitality at her famous bacon and eggs breakfasts for seniors.”

Still, she expected standards to be adhered to. The College’s archives include a scrapbook created by Rita Goldberg Miller ’45, in which appears this message from the president: “It was brought to my attention that you girls were in the village for Sunday dinner in informal dress. I do not know what explanation you have for such conduct.”

Nor did she limit her advice and example to the Keuka College campus. The Oct. 27, 1948, edition of the Cornell Daily Sun reports “Dr. Katherine G. Blyley, president of Keuka College, will address a meeting of the Ithaca Branch of the American Association of University Women. (The) topic of her discussion will be ‘Education for Social Responsibility.’”

Such lectures were common. She spoke to organizations throughout the region and extended her influence to the nation’s capital, where President Dwight D. Eisenhower appointed her to the Board of Foreign Scholarships – making her one of 175 women named to federal policy-making or diplomatic positions during the Eisenhower Administration.

A legacy of determination

Such was the president’s reputation that she attracted students who had never even visited the campus.

“My choice of Keuka was serendipitous,” recalled the late Claire Tuttle ’47 many years later. “I had no chance of visiting the College ahead of time to check it out. These were war years, and gas was scarce. A friend of my mother mentioned that Katherine Blyley, president of Keuka College, was doing a good job upstate. I applied, was accepted, and even received a scholarship.”

Of course, attracting students was never the goal for Dr. Blyley; seeing them succeed was.

“At Flushing High, I had been a very unhappy, very shy, and self-conscious girl, lost in a big impersonal public high school,” Claire continued. “At Keuka, I blossomed!”

Blossoming was the point – especially at a time when opportunities for women were few and examples of successful women rare.

“I am grateful to Dr. Blyley for creating an environment where bright young women could see themselves becoming leaders in a world where women in leadership were practically unheard of,” says President Storey. “I wonder what Dr. Blyley would say if she knew that more than 70 years after she served as Keuka College’s first female president, women still comprise only 5 percent of Fortune 500 CEOs.”

It’s not hard to imagine Dr. Blyley responding to that statistic by redoubling her determination to educate the women who would help change it; women who would, as Julia Lobotsky ’43 quoted her, “go out and do great things.”

That determination can be found even today on the College’s campus: in the hundreds of students who every year continue to hone their education and life experience via Field Period® experiences, in a vibrant Nursing program that has marked 75 years of educating first-rate medical professionals, and in the expression found on the face of a portrait that hangs in the northwest corner of the Gannett Room in Lightner Library.