The Keuka College Spirit is Strong with Julia Lobotsky ’43

Inspired by the “giants” of Keuka College, she was later honored for inspiring and promoting women in scientific careers. 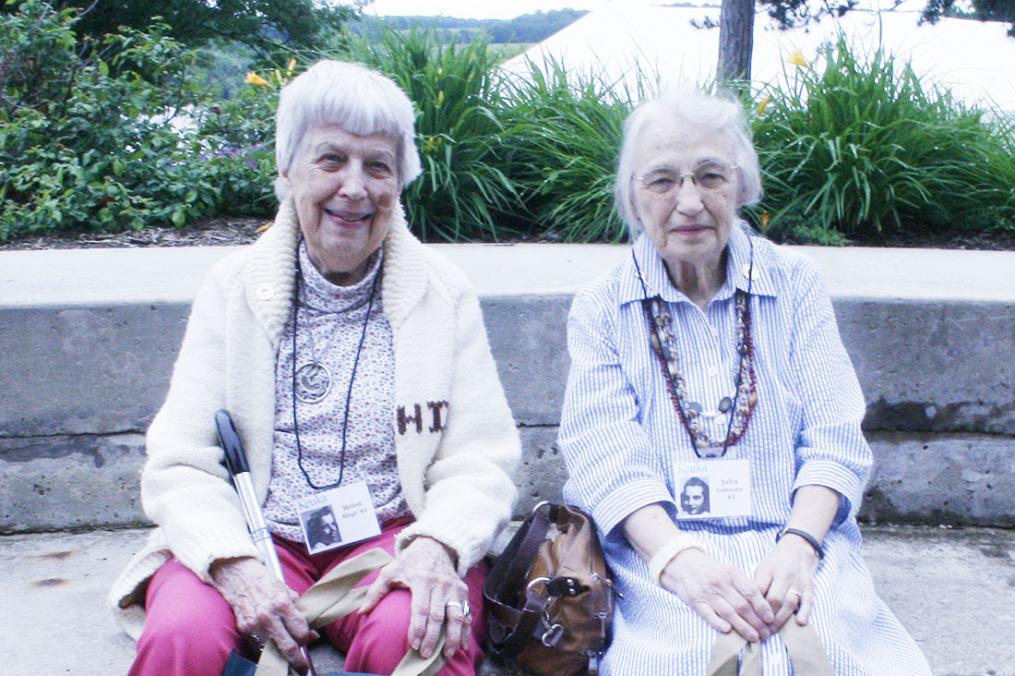 Julia Lobotsky '43, at right, returned to campus in 2013 for her 70th Class Reunion. With her is classmate and roommate Helen Klopf '43.

Julia credits professors such as Dr. Marion Lougee with challenging her to push beyond her limits and prove she could do more than she thought she was capable of. For example, during Julia’s senior year, Dr. Lougee gave her students the option to take an oral exam, given by an outside chemistry professor who could question them on anything chemistry-related.

“Taking this exam—or not—would not affect our finals,” says Julia. “Of course, we all took the exams. It was scary, but once we discovered that we could answer all the questions, it became rather fun; I enjoyed what I thought I could not do. We could never disappoint our wonderful Dr. Marion!”

After graduating from the College, she earned a master’s degree from University of Rochester. Julia spent her career at the Center for Population Control at the National Institutes of Health in Bethesda, Md., first as a biologist in the Population and Reproductive Grants Branch, then as head of reproductive biology in the Reproductive Sciences Branch.

Upon her retirement in 1991, Julia received special acknowledgment as she was presented with the Endocrine Society’s Women in Endocrinology Lifetime Achievement Award for inspiring and promoting women’s scientific careers.

In turn, Julia has been inspired by the women at Keuka College, including Dr. Katherine Gillette Blyley, whom Julia called “Dr. B.”

“Dr. B. was a remarkably talented woman, an English professor and then acting president while I was there,” says Julia. “She was passionate about ‘her girls.’ During my time at Keuka College, Dr. B. helped start Field Period®, developed the community service program, and help shepherd the first class of the new nursing program—three seminal programs for Keuka College. That was quite an accomplishment. Then she became president.”

In addition to Dr. Blyley, who was the first woman to lead the College, Julia draws inspiration from the other professors she had as a student, as well as classmates, alumnae, and members of the College’s Board of Trustees, where Julia served from 1995-2004 on the Academic Affairs Committee. As a testament to her service, she was named Trustee Emerita.

“When I became a trustee, I met remarkable women, such as Kay Meisch ’58, Esther Yoder ’60, and Marcia Dugan, to list just a few,” she says. “But there are so many more, including some Keuka College graduates.”

In addition to returning to campus for Board meetings, Julia returned to campus in 2009, when she delivered the commencement address and received an honorary Doctor of Humane Letters. A member of the Johnson Anderson Heritage Society, Julia is the 1993 recipient of the Keuka College Alumni Association’s Professional Achievement Award. Her stellar research and administrative career in reproductive biology and endocrinology brought great distinction to her alma mater.

She epitomizes the term “sacrificial giving” through her support of the Shaping the Future: One Graduate at a Time Campaign, The Campaign to Save Ball Hall, the Keuka College Golf Classic Scholarship, and Friends of Lightner Library, among others. In addition, the room she shared on the third floor of Ball Hall with Helen Klopf ’43 is a gift from the classmates and is named in their honor.

So why does Julia remain connected to Keuka College, some 75 years after graduation?

“It’s the great Keuka spirit: the great teachers, the friendships, the alumnae interactions,” she says. “We were instilled with confidence by Dr. B. ‘to go out where the world was waiting for us, don’t stay home.’ Nobody ever told us that before. There were giants walking the campus then. We would never dare disappoint them when we were told ‘of course you can do this and you will do it well.’ So, we did it, and we did it well!”