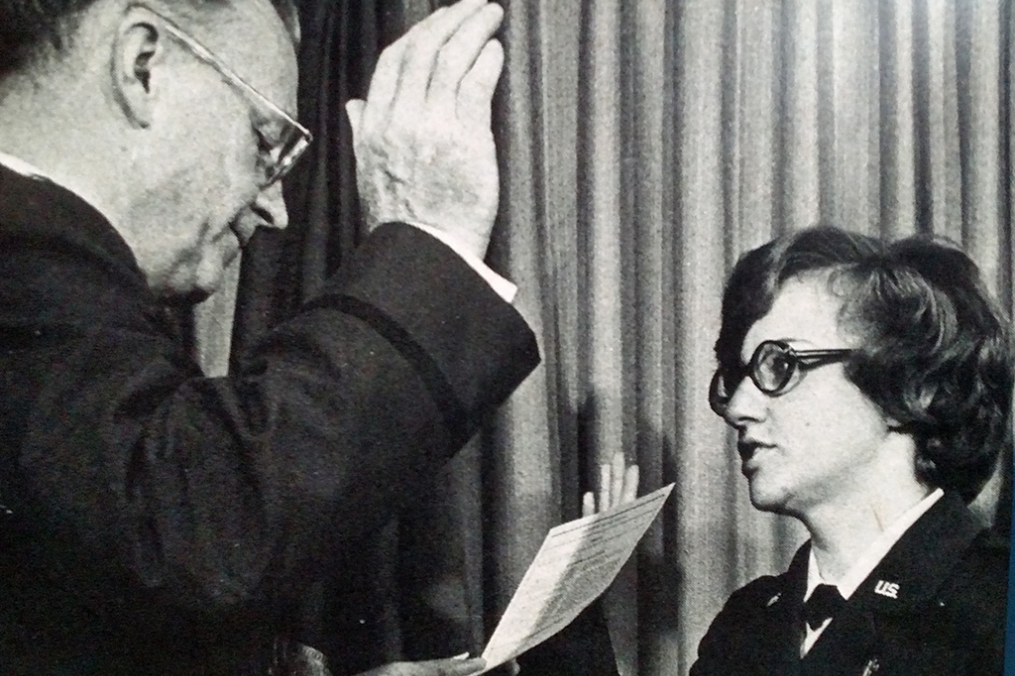 That was the day that alumna Lorraine K. Potter, just five years after graduation, was administered the oath of office in Washington, D.C., becoming the U.S. Air Force’s first woman chaplain.

But then, as a military officer and pastor, Maj. Gen. Lorraine K. Potter ’68 did double duty when it came to breaking glass ceilings.

“The most significant thing that prepared me for two male-dominated professions – religion and the military – was Keuka College,” she told an audience of hundreds during a lecture at her alma mater last fall.

Her trailblazing career in the military was recently celebrated by the Online Chaplain Museum, which casts her successes in the context of a generation in which the Women’s Movement sought progress amid opposition from conservative cultural institutions.

By daring to challenge the Air Force’s ban on women pastors, the Online Chaplain Museum writes, Maj. Gen. Potter “opened the way for clergywomen of all faiths to freely follow their callings as Air Force chaplains.”

Lucretia Davis Jephson was the daughter of Robert Benson Davis, the founder of the Davis Baking Powder Co. of New Jersey. You’d be hard-pressed to find a Keuka College student, or graduate since the late 1940s for that matter, who isn’t indebted to the late Lucretia Davis Jephson and the two educational trusts that carry her name.

Mrs. Jephson, who received an honorary Doctor of Humane Letters from Keuka College in 1970, had strong feelings for the College. Mrs. Jephson was religious, and the College’s Baptist affiliation was an important factor in her becoming our benefactress, or as President Emeritus Jorge L. Díaz-Herrera called her, “Keuka College’s godmother.”

Examples of Mrs. Jephson’s generosity and belief in the College’s mission are everywhere: Norton Chapel (named for her good friend Dr. Arthur H. Norton, who served as the College’s president from 1919-35); Davis Hall (named for her parents); the Joseph and Mary Weed Recreation and Athletics Center (named in memory of her maternal grandparents); and the Lucretia Davis Jephson Science Center.

But the Jephson legacy goes well beyond her support of capital projects; what are affectionately known as “Mrs. Jephson’s buildings.” She made it possible for countless members of the Keuka College family to stay in school and earn degrees by funding need-based scholarships. The College also received a six-figure bequest realized upon her death in 1979.

“Associate Professor of American Sign Language Sharon Kocher, one of the first people I came in contact with when I was touring Keuka College, has impacted me in so many ways. I skipped the entire tour after meeting her because I knew this is where I wanted to go. I’ve had many classes with Sharon and it is always an honor to be in her class. She is passionate and encouraging. She works very well with the students and always has her door open. She pushes you to do your best and never cuts corners. Sharon has opened the minds of many and for that I am very grateful. I am inspired by the person she is and her teaching skills. I couldn’t have asked for a better professor to introduce me to my first, formal ASL class. Sharon is always supportive of her students and builds up our confidence. Thank you, Sharon!