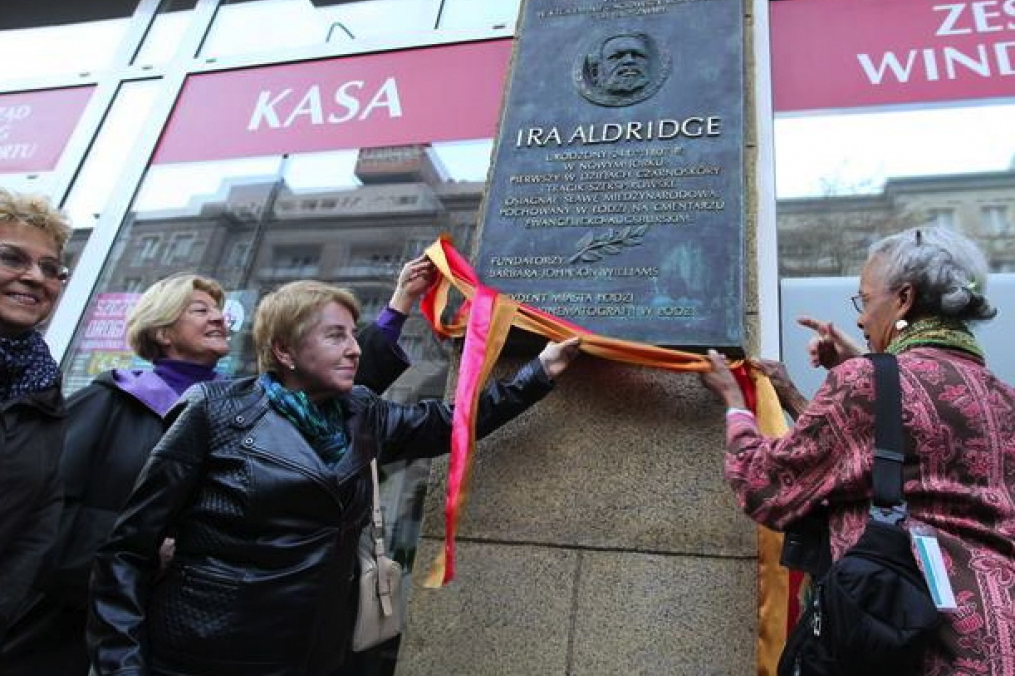 Barbara Johnson Williams ’63, far right, helps unveil a plaque commemorating the 19th-century actor Ira Aldridge in Łódź, Poland, in 2014. The plaque is on the front of the former Paradyz Theatre, where Aldridge died unexpectedly on Aug. 7, 1867, during a rehearsal of “Othello.”

A chance meeting led Barbara Johnson Williams ’63 on a journey to cement a place in history for 19th-century African-American actor Ira Aldridge. The actor, a renowned interpreter of Shakespearean tragedy, found success internationally, particularly in Europe.

“My focus was not as much on how well he was revered, received awards, or honored at the national level of so many European countries,” says Barbara. “I’m not a historian, or Shakespeare scholar, or even a general theater buff. My work delves with the legacies he left in the U.S. and England.”

Aldridge is the only African-American actor to have a memorial plaque in his name installed in the Shakespeare Memorial Theatre at Stratford-upon-Avon. And thanks in large part to Barbara’s efforts, another plaque was unveiled in 2014 in Łódź, Poland, to honor Aldridge’s memory and legacy. The plaque is on the front of the former hotel and Paradyz Theatre, where the actor died on Aug. 7, 1867, during a rehearsal of “Othello.”

As Keuka College commemorates the 75th anniversary of its storied Nursing program, there have been many opportunities to reflect on its origins and successes. Just as inspiring are the words of individual nurses, many of whom shared reminiscences at the time of the program’s 50th anniversary. The recollections of Marie Julene Radcliffe ’52 capture the hard-won sense of accomplishment and pride earned by the College’s Nursing students: “Our capping ceremony (along with my much later wedding day) was one of the two most important days of my life. And the next day, a patient at Thompson Hospital called me ‘Nurse.’ I just glowed.”

Celebrating women’s history at Keuka College to me means to highlight the progress and contribution women made that most often times are swept under the rug. Which Keuka College Woman inspires me? Most certainly (HEOP Director) Lisa Thompson. I admire her work ethic and persistence in balancing her work life at Keuka College while completing her doctorate degree. That is not an easy thing to do.