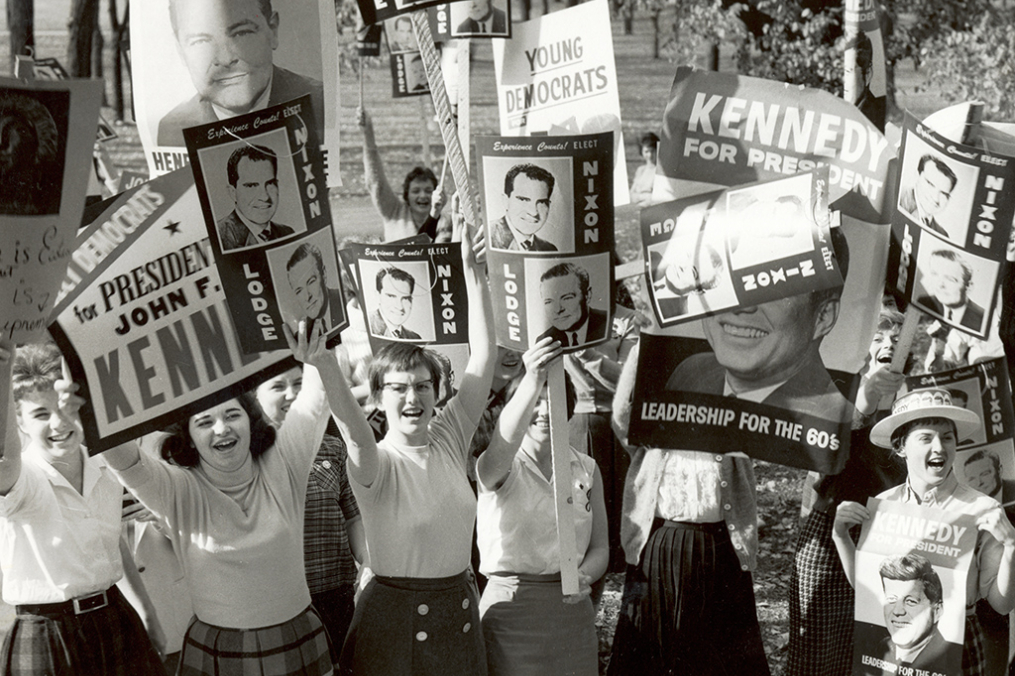 Pre-election campaigning brought out Keuka College students from both sides of the aisle in 1960.

Pre-election campaigning brought out Keuka College students from both sides of the aisle in 1960.

Keuka College’s Political Science, History and Pre-Law Club has been busy of late, registering students to vote, scheduling public lectures, and carrying on the tradition of political activity on campus.

That activity arguably began with Frankie Merson ’04, Keuka College graduate, professor, and department chair. She was also a leading voice for women’s suffrage 100 years ago and stayed active in political affairs, including as a member of the League of Women Voters, her entire life.

In the late 1930s and early 1940s, College President J. Hillis Miller was practically pen pals with First Lady Eleanor Roosevelt, who visited the campus on at least two occasions. His successor, Katherine Gillette Blyley, was tapped by President Dwight D. Eisenhower to serve on a federal commission.

The student body was no less engaged, as a height-of-the-Vietnam War news release from 1969 makes clear: “Keuka College will suspend classes Wednesday for a moratorium of reflection. … Among the topics to be discussed will be … ‘War: Ethical Dilemma,’ ‘Violence in American Life,’ (and) ‘Racism.’”

Disagreements didn’t always lead to moratoriums, as in 1960, when supporters of presidential candidates John F. Kennedy and Richard M. Nixon demonstrated side by side.

One of Keuka College’s biggest cheerleaders is arguably Ann Tuttle, chair of the Division of Business and Management and professor of management.

She has long been committed to the College in a variety of ways – and she insists that commitment won’t wane, even as she prepares to step down after more than two decades at the College.

“I will be retiring from teaching, campus activities, and all my other duties, but will help the transition for a year,” she says. “I will remain a friend of Keuka College for the rest of my life.”

Click here to read about Professor Tuttle’s career at Keuka College – and her post-career plans.

From Megan Savold ’19:
I would love to share a story of an inspiring woman on campus! Campaign and Grant Manager Theresa Oderman has inspired me, and has been a role model of mine since I started my work-study job in the Development Office in September of 2015. She has been nothing but supportive since I have met her, and I know I can always talk to her when I need someone to listen, or have good news to share. She helped me to be more confident in myself and take pride in my work. Theresa made me smile every time I walked into work and continues to do so when I am able to visit her office. Not only has she been wonderful to work with, she helped to make Keuka College my home away from home, and I couldn’t be more grateful.

From Dominique Di Luigi ’19:
A woman who has inspired me is Dr. Janine Bower, professor of sociology and criminology. She inspires her students every day to work through each obstacle that we face on a daily basis as best as we can. She inspires me to keep moving forward and teaches us to be successful in any direction we go with our degrees. She makes us feel confident in what we have learned, and ready to apply it to real life situations.