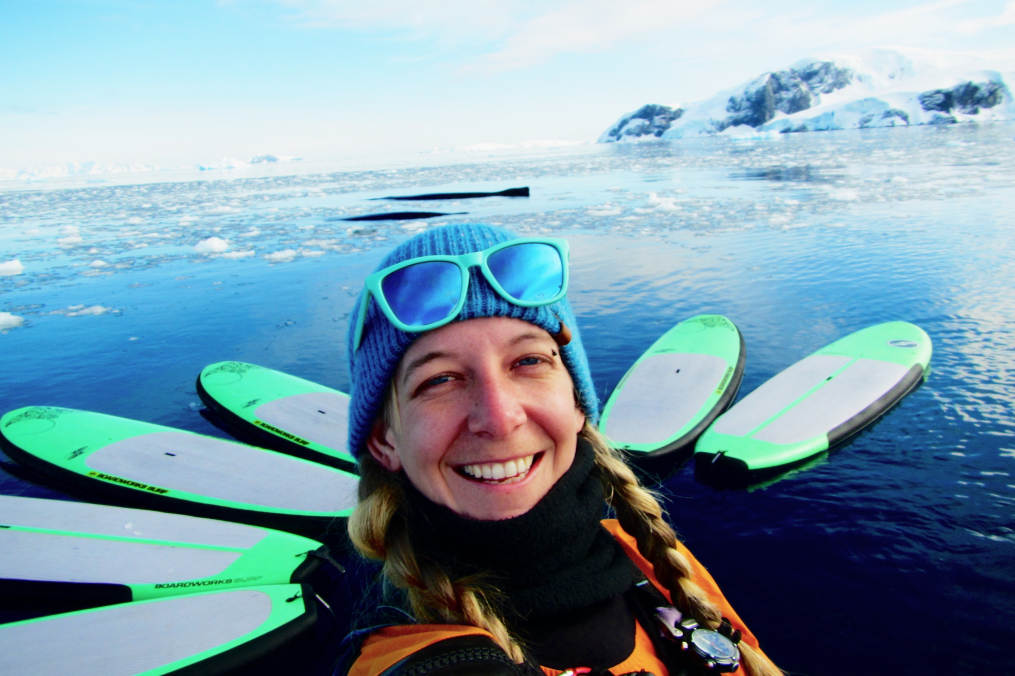 Meghan Roberts ’08 didn’t just tackle the world upon graduation, she traveled it. Among her experiences were two years running teambuilding programs in Hong Kong, guiding young backpackers in New Zealand, various duties at ski resorts in Colorado, and teaching stand-up paddleboarding from an expedition ship in the Antarctic. Oh yes: She also launched her own company, Mountain Surf Paddle Sports, in Fayetteville, W.Va.

We cap our accounts this week of famous first-lady visits by noting a return engagement. After her widely noted tour of the campus on Feb. 16, 1938, Eleanor Roosevelt returned almost one year to the day. “Mrs. Franklin D. Roosevelt, speaking before a crowd of 300 at Keuka College Wednesday morning, February 15, brought to the attention of the students the importance of watching the news of the day so as to be informed of world and national events,” reported a 1939 local newspaper account. In the story, Mrs. Roosevelt described Keuka College as “a very interesting and forward-looking school,” and said she had been monitoring the College’s progress since her visit the previous year. As with many of her activities, the visit was cited in her daily syndicated column, “My Day.” The account, which includes mention of her breakfast with Keuka College President Dr. J. Hillis Miller and his wife, is available online.

What does women's history at Keuka College mean to me?

When I attended Keuka College (’70-’74) it was an all-girls college. It was the perfect place for me! I was a very quiet, shy, introverted teenager when I arrived in 1970. I have a disability and had very low self-esteem. At Keuka College, I found a place where I felt safe and secure and nurtured. I started to get involved in all kinds of activities. I was in student senate, I chaired committees, I was selected as one of the RAs of Space Hall (a then-freshman dorm); and I was even crowned May Day Queen my senior year! None of those accomplishments were expected or planned! When I left Keuka College, I left as a confident young woman, with the courage to go on to graduate school; to pursue a career in working with children with severe disabilities; to take on leadership roles that I never dreamed I would be offered (or that I could do). I don't believe a larger school or a co-ed school would have provided those opportunities that were truly life changing for me!

Which Keuka College woman (women) inspired me, and why?

The first name that comes to mind is Sandy Tothill ’71. She was my RA on Ball 4 my freshman year. She was everything I wasn’t—confident, outgoing, and a wonderful musician. She took me under her wing; she was the one who gave me the nickname “Mic” (my initials); even Dr. Glick, Keuka College president at that time, called me Mic. I idolized her. She introduced me to people and activities all over campus. I survived that first quarter and came back after Field Period® because of Sandy.

Another name that comes to mind is Sue Goodrich ’54. I worked with Ms. Goodrich a lot because she was the faculty person in charge of May Day—I was on the planning committee three years, and chaired it for two years. She was very supportive and so nice.

And Ms. Breeze! Such a sweetheart! She was our house mother at Ball Hall my freshman year. When I was an RA in Space Hall, she had moved there. I remember being so flattered when she asked me to stay in her apartment (in Space Hall) when she was gone for a weekend. Again, a tribute to how much the “women’s college” atmosphere helped me grow.