An Abundance of Opportunity 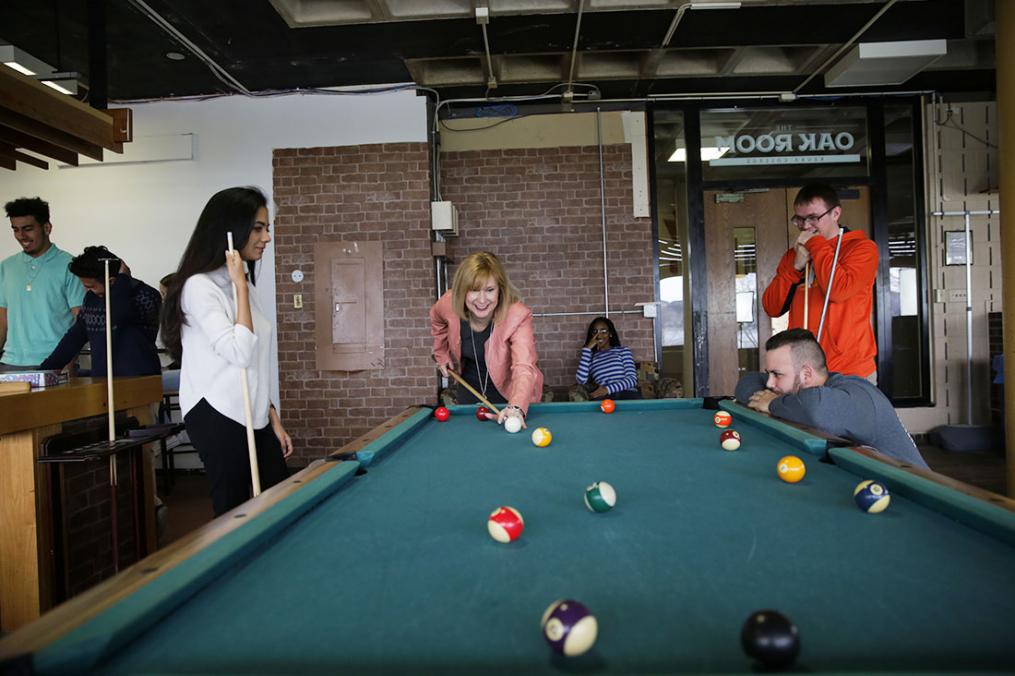 Interim President Amy Storey (center) stopped by the College's Oak Room recently, where a group of students was playing pool and other board games. She spent time talking with the students and joined in on a game of pool. It is the students, the president says, who are her top priority. (Photo by Giorgio Varlaro)

From her lakeside office in Ball Hall, Keuka College Interim President Amy Storey has an impressive view of campus—one that stretches from the Dahlstrom Student Center to Norton Chapel to the Lucina. In between, the blue waters of Keuka Lake shine through the trees, capturing the hearts of generations of Keuka College students.

And it’s the students who she believes are her top priority as president.

“We’ve always been student-centered but I think, especially when resources are scarce, we need to make sure that we are considering students’ needs before decisions are made,” says President Storey, the third woman to lead Keuka College, after Dr. Katherine Gillette Blyley (1947-58) and Dr. Elizabeth Woods Shaw (1978-83).

President Storey took the reins of the College, for an interim period, on July 1 after President Emeritus Dr. Jorge L. Díaz-Herrera retired.The College’s Board of Trustees has appointed the former vice president for advancement and external affairs through June 30, 2020.

She assumes the office amid higher-education headwinds.

“Keuka College has always been a special place that has consistently demonstrated resilience. I think that we really need that quality right now, given the challenging environment for higher education in the country, and especially in New York state,” says President Storey. “But I have complete faith that the amazing professionals who work here will make the right decisions for our students and for the future of the College.”

Every day is different, and every day brings its own challenges, but President Storey remains optimistic.

“I hear so many great success stories from our students, faculty, staff,” she says. “When you consider the magnitude of the work we have to do here, the challenge is what to choose to focus on. There is an abundance of opportunity and that is what is fun about being president.”

One of those opportunities is the unlimited possibilities Keuka College students have to learn and grow. Which, according to College Board of Trustees Chair Alan Ziegler, fits right into President Storey’s leadership style.

“When we interviewed Amy for the role as vice president, one of the questions asked was ‘describe your management style,’” says Mr. Ziegler. “Amy answered in two parts, one being that ‘I’m a developer of people.’ And I believe she helps people be the best they can be.”

Now some eight months into her tenure, President Storey sees an educational landscape dotted with challenges but open to opportunity.

“We talk about the ‘Keuka Magic,’” says President Storey. “It is a real, tangible thing. It happens every day, and I don’t know what it is, or where it comes from, but it’s real. And anyone who has worked here for a little while has experienced it. Whether you thought you had a problem that was insurmountable when suddenly the solution presents itself. Or a student that you thought had obstacles they would never overcome, and they do. That’s the Keuka Magic. I don’t know why—maybe it’s the water in the lake.”

Along with that magic comes a lot of hard work and an eye toward the future, something that isn’t lost on President Storey as she works to be an agent of progress on campus.

“We are all stewards of the College at different times, and when an organization exists for 128 years, we only touch it for a very brief period of time,” she says. “So, I hope to leave Keuka College better than I found it.”

Editor’s note: A feature story in the Winter 2019 issue of Keuka College magazine highlights more of the president and her plans during her tenure.

The Board of Trustees appointed Amy Storey as president for an interim period, from July 1, 2018, through June 30, 2020. The Board launched a search for a permanent president at its Spring 2019 meeting.