During Women's History Month, Keuka College celebrates its influential educators and leaders, past and present. 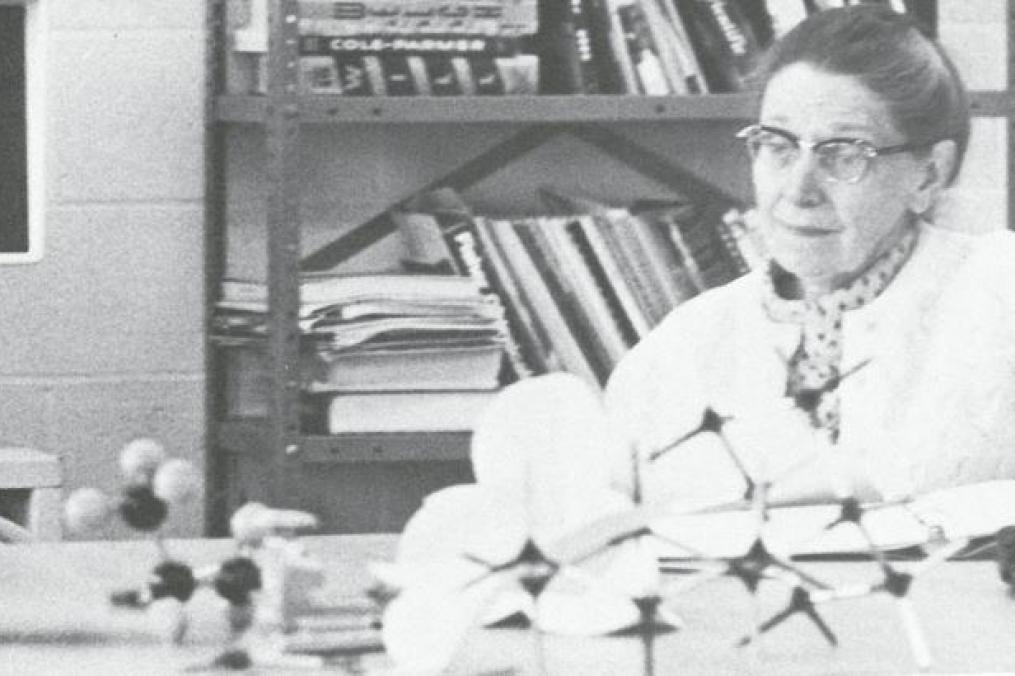 Dr. Miriam Michael Stimson is shown in the 1973 issue of the Keuka College yearbook.

EDITOR’S NOTE: Throughout Women’s History Month, Keuka College is celebrating the women – past and present – whose dedication, accomplishments, and influence have contributed to the College’s legacy.

While studying to obtain her Chemistry degree at Keuka College, she took note of Dr. Miriam Michael Stimson, who she calls “an example of true leadership.”

Describing Stimson as determined and very secure in herself, McLaughlin said she was “perfect to be dealing with young women in an environment that was male-dominated: the sciences.”

The sage professor had some practice.

Sister Miriam Stimson, OP – she was a member of the Adrian Dominican Sisters – was a noted figure in the world of chemistry long before she arrived at Keuka College in 1969 for what would be a decade of instruction and research.

Born in 1913, she studied chemistry at what was to become Siena Heights University, going on to earn her master’s and doctorate degrees at the Institutum Divi Thomae in Cincinnati.

Her early work in using a stereoscope for cell research led to an invitation to lecture at the Sorbonne in 1953 – only the second woman to receive such an invitation (the first was Madame Marie Curie). That same year, she became the first woman invited to lecture on chemistry at Notre Dame University.

Such was her renown, and so few were the women active in the field, that she found herself listed in several editions of “American Men of Science.”

“She was a woman who was ahead of her time,” McLaughlin marveled only too accurately more than half a century later.

Dr. Stimson was also instrumental in laying the groundwork for unlocking DNA by pioneering a new method of ultraviolet analysis of DNA bases.

According to the publisher of “The Soul of DNA,” which tells the story of Stimson’s role in the discovery of the DNA double helix, “Using potassium bromide (KBr) to prepare the DNA bases for analysis by infrared spectroscopy, Sister Miriam Michael successfully developed a chemical method that affirmed the structure of the DNA bases and of the double helix itself.”

Her 10 years at the College were bookended by long stints at Siena Heights University in Adrian, Mich. – 30 years before and 13 years after. She maintained an office at the college into the 21st century and was honored with the university’s highest award in 2002: The Siena Medal. She died following a stroke six weeks later.

“Miriam is at rest,” the college’s then-Dean of Arts and Sciences Sharon Weber, OP, said in a Siena Heights University magazine story about Stimson’s passing. “But I imagine that heaven is astir, and will never be the same.”

Her memories live on, however, including in the students she taught during her time at Keuka College.

“She was an example of true leadership,” says McLaughlin. “She really showed what it’s like to not underestimate yourself. Outside of my mother, she was one of the first people who really presented that picture for me.”